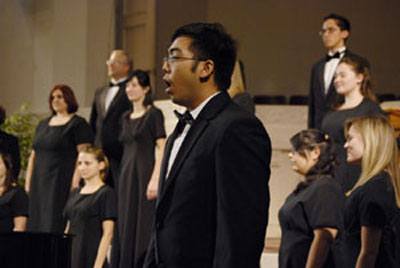 The 10th Annual Friends Choral Festival included four high schools and the University of La Verne on Friday at the La Verne Church of the Brethren. Among the performances was tenor Michael Fausto, a ULV senior music/vocal performance major, who sang an arrangement of “Loch Lomond” by Jonathan Quick. / photo by Walter Mansilla

The University of La Verne hosted its 10th Annual Friends Festival at the La Verne Church of the Brethren, which included performances by the ULV Chorale and four high school choirs on Friday.

The festival was a way to recruit new students to the University of La Verne Chorale and Chamber Singers.

This annual event was adjudicated by Mary C. Breden, director of choral activities and chair of the department of music at Loyola Marymount University in Los Angeles.

“The festival ran very smoothly without a hitch,” Todd J. Harper, director of choral activities, said. “All of the high school choirs were very accomplished.”

The Ramona Convent Secondary School Chamber Singers, conducted by Joseph Paguio, along with Cindy Lam as accompanist, started off the festival performing “Sanctus (Mass XVIII)” by Gregorian Chants, “Festival Sanctus” by John Leavitt, “Light Thine Eyes” from “Elijah” by Felix Mendelssohn and “Go Where I Send Thee!” by Paul Caldwell and Sean Ivory.

“There were very good qualities in all of the students from the high schools,” Paguio said. “It was great for peers to show each other the kind of work we have been doing.”

Paguio is in his third year conducting at Ramona Convent Secondary School and worked with Harper as his assistant for the men’s choir at USC.

The San Marino Boys Choir, conducted by Howard Cheung with Andrew Lu as accompanist, sang “Leonardo Dreams of His Flying Machine” by Eric Whitacre and “Karimatanu Kuicha” by Ko Matsushita.

San Marino was a favorite among the school conductors.

“San Marino stood out well,” Paguio said. “There were very good things in their performance.”

“San Marino’s literature was extremely difficult for a high school,” Harper said. “It was at a college or professional level.”

Cheung has been conducting at San Marino for the past seven years. He also attended school with Harper, was in the same choir, and they were roommates in college. They remain close friends to this day.

The University of La Verne Chorale finished the festival with a solo by tenor Michael Fausto, singing “Loch Lomond,” by Jonathan Quick.

The chorale also sang “No Mark” and “Wood” from “Four Pastorales,” by Cecil Effinger and “Sure on This Shining Night,” by Stroope.

“Many of my students were talking about Michael’s solo,” Cheung said. “The University of La Verne did an outstanding job.”

Harper said this festival was a way to demonstrate how the University choir is different and presents to the high schools how a choir works on a collegiate level.

It was also used to help get the ULV name out in the choral world.

The choir offices helped run the festival, and some of the students from the University hosted the event.

“I hope this tradition will continue,” Cheung said. “I also hope we will be able to collaborate more with the University of La Verne in the future.”

Incentives given for eco-friendly campuses
Happenings