By Chris Weedon, Walter Mansilla on November 21, 2008 in Sports, Volleyball 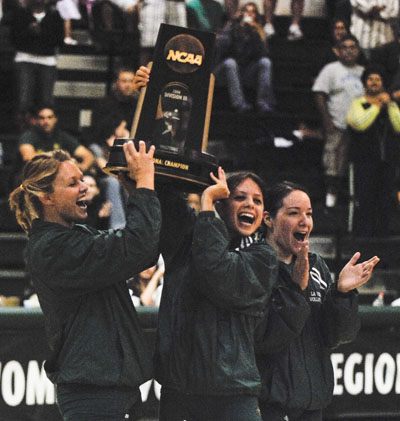 The La Verne volleyball team took another step toward a national championship yesterday traveling to Bloomington, Ill., and beating SUNY New Paltz in straight sets, 25-15, 25-16, 25-16, to advance to the semifinals round. La Verne will face Juniata tomorrow at 2:30 p.m., PDT. The Leopards narrowly lost to Juniata earlier this season.

“We decided to stick to our motto of taking it one day at a time. It doesn’t matter whom we play; we only need to worry about our 30 by 30,” junior middle blocker Crista Jones said.

“At the beginning of the season, we made goals for ourselves. It [winning the region] was part of our goals. It’s very gratifying,” head women’s volleyball coach Don Flora said.

The tournament was held on the Leopard’s home court this past weekend, and the road to the championship found the women up against a couple of familiar opponents.

In the second round (La Verne had a bye through the first, thanks to its superior season record), the team was matched up against Nebraska Wesleyan, which they defeated Oct. 17, 3-0.

This match was a little more closely contested, with a final game score of 3-1, but had the same result: a ULV win and a spot in the championship game.

The final found La Verne pinned up against conference rival Cal Lutheran for the third time this season, with similar results. Cal Lutheran stole the first set 25-20 and took control of the second early on, going ahead 12-4.

“The middle of game two was kind of a gut check. Our players had to decide if they were going to do what it takes to win or check out. They made the necessary adjustments,” Flora said.

Unfortunately for the Regals, the Leopards made those adjustments and would not be denied a win. The team rallied from behind to take the set and would roll from there, winning the next two sets en route to a 3-1 match victory.

“It feels great to move on and get to keep playing. We didn’t win the last two years, so winning is a big accomplishment,” senior outside hitter and recently selected First Team All-American Brianna Gonzales said.

With this obstacle out of the way, the women’s sights turned to Bloomington, where their national title run began against New Paltz Thursday night. La Verne sits in the second seed in the eight-team tournament.

This match was interesting for ULV, considering its lack of experience with New Paltz State.

There are no common threads amongst opponents for the two teams to compare to in order to assess what kind of team they were.

“Our goal is to go out there and take care of our side of the net and worry about our game. We want to come out with a lot of excitement and energy. We want to win and have fun doing it,” Gonzales said.

Potentially looming in the matches to come are No. 4 Emory and No. 6 Juniata, which both beat La Verne earlier in the season.

“I’m pretty confident in our team. It is one of the closest and most dedicated teams that I have ever been on. We are all focused on our overall goal of winning a National Championship,” sophomore defensive specialist Chelsea Sleight said.

Chris Weedon can be reached at christopher.weedon@laverne.edu. 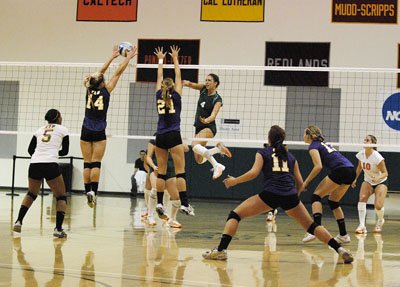