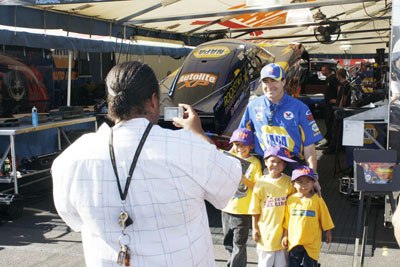 The National Hot Rod Association POWERade Drag Racing Finals were held last weekend at the Auto Club Raceway in Pomona. Ron Capps, with seven career No. 1 qualifiers, and driver of the first Funny Car sponsored by NAPA Autoparts, meets with fans of the NHRA POWERade Day racing series. The event was not just about racing but was about the fans as well. / photo by Rafael Anguiano

The weather was scorching, the bleachers were packed, and the smell of nitromethane filled the air on Nov. 13-16 as the National Hot Rod Association POWERade Drag Racing Series returned to the Auto Club Raceway at Pomona for the 44th annual Automobile Club of Southern California NHRA Finals.

I have been attending the NHRA drag races since I was a little girl and I feel that it is something everyone should experience in their lifetime.

Maybe fast cars are not your thing, but I guarantee that if you attend one of these electrifying events, it will not be your last.

“I just started coming to the drags a few years ago, and now I can’t miss them,” Shannon Talbot, a La Verne resident and NHRA fan and follower, said.

Although the 2008 POWERade Drag Racing Series came to a close last weekend, the 2009 season begins in February in our neighboring town of Pomona at the Kragen O’Reilly NHRA Winternationals, and I want you all to be prepared.

“I love living near Pomona because I get to come to the start of the season and the end of the season,” Jeff Benson, a La Verne resident and NHRA fan, said.

NHRA advises all fans to “come early, stay late and be prepared.” The gates usually open around 8 a.m. and do not close until 7 p.m., and, to be completely honest, it is impossible to see and do everything during that 11-hour span.

“The sportsman classes are always fun to watch because they are so unpredictable,” Geoffrey Kruetzer, a La Verne resident and NHRA fan and follower, said. “The outcome depends a lot on the driver rather than the car.”

What is great about the NHRA drag races is that they allow fans to have direct access to the race teams.

With their open pit policy, fans are able to wander around the pits at their own free will, watch the mechanics hard at work, ask a few questions and even get autographs from the drivers.

If you want to see some real action take place, my advice is to head over to your favorite team’s pit either 45 minutes before they are scheduled to run or 30 minutes after to see the mechanics at their prime.

If you are still looking for something else to do, the NHRA drag races also offer several drag racing simulations, exhibits, stores and display cars for fans to check out.

“There is just so much going on,” Talbot said. “I would love to check everything out, but there is just not enough time in the day.”

Because the races are held on a portion of the Fairplex grounds, the food and drinks provided are phenomenal.

I don’t know about you, but give me a corn dog and a beer, and I am one happy camper.

Even when the gates close, there is still fun to be had as many people head over to the campgrounds located in the Pomona Fairplex parking lot and celebrate the success of the day.

Motorhomes, RVs, trailers and Weekend Warriors are lined up as far as you can see, and everyone is barbequing, hanging out and having a good old time.

“A couple of our buddies had two bands come out to the campground this year,” Kruetzer said. “It rocked.”

I hope that I have convinced you all to come check out the next race in our neck of the woods and experience the thrill of NHRA drag racing first hand. The Kragen O’Reilly NHRA Winternationals will kick off the 2009 NHRA Full Throttle Drag Racing Series season Feb. 5-8 at the Auto Club Raceway at Pomona.

I hope to see you all there.

Madison Steff can be reached at madison.steff@laverne.edu. She holds an NHRA internship in the media office.