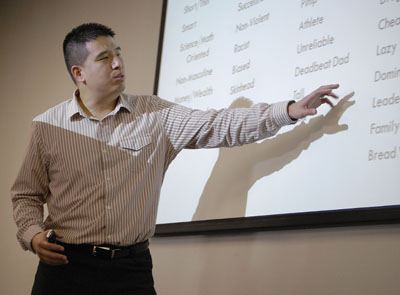 Christopher Liang, assistant professor of psychology, began his presentation with a group activity involving hasty stereotypical responses to cultural categories. The lecture, titled “The Influence of Perceived Racial Discrimination and Masculine Ideology on the Self Esteem of Latino Men,” was presented to a lively audience in the President’s Dining Room on Tuesday. / photo by Walter Mansilla

Race and gender are heavy topics to discuss in a room full of multi-racial men and women.

On Tuesday, Chris Liang, assistant professor of psychology, proved he was up for the task with his Faculty Lecture Series talk titled, “The Influence of Perceived Racial Discrimin­ation and Masculine Ideology on the Self-Esteem of Latino Men.”

Seats filled up quickly in the President’s Dining Room with University of La Verne faculty, staff and students, many of diverse ethnic backgrounds.

“When I first came to ULV, my interest focused on issues of Asian racism, “Liang said. “Since then, I thought I should focus on how people intersect race and gender.”

It is not uncommon for ULV professors to modify their lecture titles on presentation day.

It is uncommon, however, for professors to kick off their lectures with a group exercise.

Guests swallowed their lunch quickly, as Liang passed out index cards to groups of four to five people.

He instructed them to write down stereotypes and adjectives they thought were commonly believed or heard about the particular ethnic group listed on the card.

“Please keep in mind these cards are not intended to reinforce stereotypes,” Liang said.

Black, white, Asian and Latino men were the groups listed.

After three minutes, Liang collected the cards back.

According to the results, black men are commonly described as athletic, gangster, violent and promiscuous; white men are wealthy, educated, skinheads and arrogant; Asian men are calm, smart, quiet and technological; Latino men are sexist, possessive, lazy and breadwinners.

“I’d rather be Asian or white because the other two groups are perceived so negatively,” David Werner, associate professor of English, said.

The results were consistent with results from a prior survey that Liang had conducted.

“Men of color have to negotiate these stereotypes on a daily basis,” Liang said. “We have to ask ourselves, what are the consequences for their self-esteem?”

Liang is largely devoted to examining the social-culture experience of diverse groups of people and has recently focused his attention on counseling issues with Latinos.

“I hope to stimulate a deeper understanding and curiosity for the role of racism and gender role conflict in the lives of Latino men,” Liang said.

Liang found that Latino men traditionally are associated with having a machismo attitude, meaning a strong or exaggerated sense of masculinity.

Socially, there are negative connotations of Mexican-American men being chauvinists, aggressive and disconnected from their emotions.

However, 90 percent of the more than 130 Latino men Liang surveyed identified themselves as being “caballeros,” or “gentlemen,” instead of “macho.” Caballerismo refers to educated men who are loving and family oriented.

Who can be blamed for the machismo perceptions? Many believe the media is the key culprit.

“We shouldn’t rely on TV for accurate perceptions of people,” Erma Cross, graduate admissions staff member, said. “Not all Latinos carry the same stigma we see in the media.”

Liang said that movies like the “The Dark Knight” and “Quantum of Solace” undoubtedly contribute to the masculinity ideology.

Liang had an entire slide in his Powerpoint dedicated to stereotypical images in the media of Latino men.

There were pictures of Enrique Iglesias as the Latin lover, a Hispanic gang member Halloween mask and the lazy, slow Bandito.

However, there were a few mentions of more realistic portrayals in the media, including images of Jimmy Smits as the President of the United States on “The West Wing”and the loving, supportive clan on “American Family”on PBS.

While these shows are not the majority of representations, the general population is greatly influenced by what is featured in the media.

“Boys see images of men gaining status for seeking violence and adventure, and they often strive for such masculine ideals,”Liang said.

Liang, who received his Ph.D. from the University of Maryland in 2005, said he plans to continue his research and give a follow-up presentation in the future.

Jay Jones, professor of biology and biochemistry, gave a presentation on “Fossil Woods and the Paleoclimate of the Wagon Bed Formation.”

On Tuesday at noon in PDR, the next speech in the faculty lecture series will be Donna Bentley’s “Keeping up with the Changes: Web 2.0 and Information Literacy in Universities.”

There will be several presentations during January interterm, including lectures by Trish Long, Joan Branin and John Roseman.