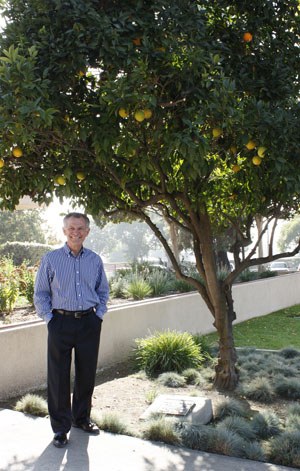 Jon Blickenstaff has served as mayor of La Verne since 1982. This orange tree was planted outside La Verne City Hall to honor Frank Johnson, Blickenstaff’s brother-in-law and predecessor in office, who retired in 1982 after 20 years as a La Verne council member and mayor. / photo by Stephanie Arellanes

Jon Blickenstaff is bowing out gracefully.

“I’ve always been a believer in trying to time things,” Blickenstaff, the long-time La Verne mayor, said. “It’s time for some other priorities, mainly family.”

Blickenstaff, featured speaker at the University of La Verne winter commencement, has served as mayor since 1982, and said he is “sure he could keep going,” but he wants to take time to spend with his grandchildren and work on some other hobbies, which include gardening and working on his 1934 and 1940 woody station wagons.

“I wish him the best,” Donna Nasmyth, La Verne city council member and assistant professor of education at the University of La Verne, said.

“He is an amazing man,” Nasmyth added. “He is one of the most fair, respectful and kind men that I know.”

“Jon and I crossed as students here at La Verne more than 40 years ago,” Stephen Morgan, ULV president, said.

“Jon is fair, even tempered, but he is also tough when it comes to values that he sees as important,” Morgan said.

One issue that has been important to Blickenstaff is the development of the hills in north La Verne.

“Our goal is to limit development so aesthetics of the hillside could be maintained from this vantage point,” Blickenstaff said. “That was one of my priorities.”

“The city has developed a well-controlled and managed pace and pattern that has served us well,” the mayor said.

“Jon is very interested in an orderly development of the city,” Morgan said. “He always holds the interest of the city and its citizens at the highest level.”

Bob Neher, professor of biology, former La Verne city council member and friend of Blickenstaff, said the mayor is concerned about the “overall health and viability of the community.”

Neher shares some of the same concerns regarding overdevelopment of the hills north of La Verne and said Blickenstaff has done a good job in that area.

“It wasn’t until he came on the council that I think we really made that progress,” Neher said.

Blickenstaff has also left an impression of being a good peacemaker and collaborator among the city council members as well as among its citizens.

“He has a talent for diffusing issues,” Nasmyth said. “He amazes me at how quickly he can do that.”

Blickenstaff said one of the things he is most proud of are the partnerships he has worked to create, including partnerships between the University and the city and city employees.

As an alumnus of ULV, Blickenstaff recalls what helped shape him.

“I just reflect on how amazing my experience there many years ago was,” Blickenstaff said.

One specific person at ULV who Blickenstaff remembers was Jack Melhorn, his sociology professor.

“I think that was a big influence of my life, far more that I realized at the time,” Blickenstaff said.

Blickenstaff said another class that really helped him was debate.

“I had no idea how much value there could be in one class and participating in debate at the college level,” Blickenstaff said. “It’s hard to train thinking, but that helps you do that.”

He said that there was a “commitment to service” in his family, and that he was a Boy Scout, then an Eagle Scout, and he eventually became a volunteer firefighter for the city in 1966.

With such a commitment to the city of La Verne and the citizens of the city, Blickenstaff plans to stay local.

“His shoes are going to be really hard to fill,” Nasmyth said.

Susan Acker can be reached at susan.acker@laverne.edu.