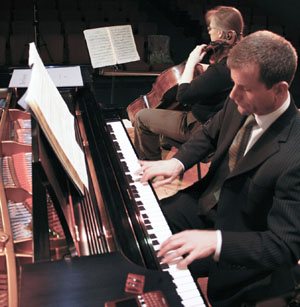 Guest musicians Timothy Durkovic, pianist, and Paula Fehrenbach, cellist, came together on the Founders Auditorium stage to present “The Complete Works for Cello and Piano by Beethoven” on Nov. 21. Durkovic serves as director of keyboard studies at Long Beach City College. Fehrenbach performs with several orchestras, including the Santa Barbara Symphony and the New West Symphony. / photo by Rafael Anguiano

The music department welcomed guest artists Paula Fehrenbach on cello and Timothy Durkovic on piano to perform the complete works for cello and piano by Beethoven, Part I, in Founders Auditorium Nov. 21.

Kristen Uglade, an Upland resident, said she was surprised by her ability to recognize the themes in each set of variations.

“I enjoyed the theme and variations pieces,” Uglade said. “Especially because the untrained listener can understand what’s going on. Beethoven clearly presented the themes, one from Mozart and one Handel, then varied it; plain and simple and easy to follow.”

Michael Lopez, music theorist and composer from Rancho Cucamonga, was also in attendance.

“These pieces were a real treat for the students who attended,” Lopez said. “The cello sonatas were particularly nice. Students should realize that in only his fifth published set of works, Beethoven stretched and expanded limits of form, limits of the instruments at the time and strayed from the expectations placed on him from his predecessors.”

Lopez enjoyed the guest artist recital largely because he credits Beethoven’s work for the reasons he composes and fell in love with music.

“These are some of Beethoven’s earliest works and display his distinctly unique use of the forms that he inherited from Haydn and Mozart,” Lopez said.

Lopez is glad that ULV makes an effort of presenting works that are part of the standard repertoire of music.

“Nearly every Beethoven piece is part of the standard repertoire,” Lopez said.

Erik Griott, an animator, traveled 40 miles from San Bernardino to hear the works of Beethoven performed by Fehrenbach and Durkovic.

He was so impressed with Durkovic’s piano performance that he purchased the available CD “Gargoyles.”

The performance was divided into two parts.

The second part of Beethoven’s works for cello and piano will be performed in February.

Fehrenbach is currently a chamber musician, teacher and orchestral musician in Los Angeles.

The cellist began her musical life in Wisconsin and received degrees from the Peabody Conservatory and Miami University in Oxford, Ohio.

Fehrenbach was chosen by Lynn Harrell to join his class at the Thornton School of Music at the University of Southern California where she received her doctorate in 1992.

Besides ULV, Fehrenbach has performed at REDCAT, the Library of Congress, New York’s Cooper Union and the Arnold Schoenberg Center in Vienna, Austria.

Durkovic was born and raised in Guatemala City and began his piano studies at the age of five.

The pianist attended the National Conservatory of Music of Guatemala with highest honors, receiving a Bachelor of Arts in piano performance at the age of 17.

Durkovic was accepted to the Juilliard School in New York and continued his musical education at Salam College and USC, where he received his Master of Music degree.

The performer has been heard on the International Voice of America, NPR, and TGNA. His new CD release “Gargoyles” has brought him acclaim can also be head on the new Albany Records release “Sixth Species.”