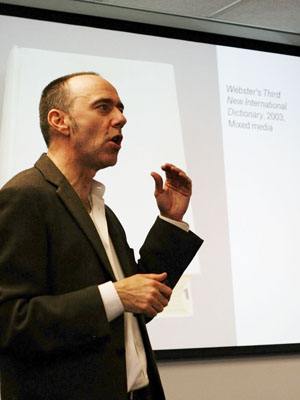 In his lecture titled “Sculptural Techniques and Data Mining Technology,” Associate Professor of Art and Department Chairman Keith Lord, spoke to more than 30 in attendance in the President’s Dining Room on Tuesday. The Faculty Research Committee and the University of La Verne Academy sponsored the event, which is part of the faculty lecture series. / photo by Steven Bier

Keith Lord, associate professor of art, spoke of new types of art on Tuesday in the President’s Dining Room with more than 30 people in attendance.

Lord’s lecture was about the different shifts in art, the inspiration of artists and the use of data mining in sculptures.

“Humans have a fascination with scale, as children they become masters of their universe, playing with small toys,” Lord said.

He talked about the different shifts in art that have not only dealt with scale, but also the ways people are inspired and the different ways they create works of art.

The lecture began with a piece from his art collection titled “Great Works of Art.”

It was a scene in a hollow book, with a hole that allowed the viewer too look into it and see a room.

The subjects in the lecture also included the use of data as a source for artists to create sculptures, called data mining.

One of the examples of data mining is the 2007 Plexiglass Sculpture made by Christopher O’Leary in collaboration with Casey Alt.

The sculpture created by Alt and O’Leary uses information such as the Dewey Decimal system and the Google database that allows people to view the most popular searches and words lit in the glass.

In the lecture one of the main points about data mining was that it stems from computer science and it keeps bringing new things that can help collect more information about society.

In one case an artist collected the patterns of the climate and created a sculpture from the information and patterns.

Many forms of this type of art are to create a statement about social or political problems, such as gathering information on pollution and other problems.

Lord described his art as shifting and moving from a more controlled type, like the book art, to political statement based art.

“It’s more about raising questions than pointing out what’s right or wrong, it’s a way to start a dialogue,” Lord said.

Lord is working on many new projects.

“As an artist interested in his work I wanted to know what he does and where his work is going, the meaning and how it interests me,” Monique Sheppard, a senior art major, said.

Faculty, current students, and former students attended the lecture to see what the new techniques for sculptures are.

Some students got a lot of new ideas coming from the lecture including Cindy Harder, a junior art major.

“I found it interesting, learning about space and form,” Harder said. “It might play into my painting class it’s a good thing to incorporate.”

Esmeralda M. Cardenas can be reached at esmeralda.cardenas@laverne.edu.