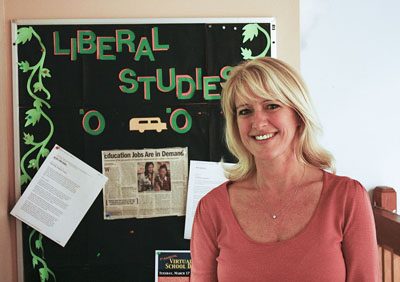 Donna Nasmyth, the first woman to serve on the La Verne City Council in its 101-year history is hoping to maintain her seat in the March 3 election. She could make history as one of two women elected to the council for the first time. She was appointed in 2007 to her current seat. / photo by Rafael Anguiano

Both Carder and Nasmyth are running along with two other candidates for two open seats. The two have been friends for more than 10 years.

Carder does not see the campaign as a political race or “running against” Nasmyth. Actually, she sees it as a spot to fill to serve the city of La Verne, and also, a way for two women to work together with the rest of the council members and mayor.

“There is a possibility we can both make it through and that is comforting,” said Nasmyth, who has served the council since 2007 in an appointed position.

Nasmyth was the first woman to sit on the La Verne city council in its 101-year history. She was appointed to fill the seat of Dan Harden, upon his 2007 retirement. Prior to council position, she was a planning commissioner for La Verne for three years, and she was on the Youth and Family Action Committee.

Being born and raised in La Verne has helped Nasmyth understand what the city needs to best serve the La Verne residents.

Being on the city council has been “the most rewarding experience” of her life, Nasmyth said.

“It is a learning experience,” Nasmyth said. “I’m just enjoying giving back to the community. I have a lifelong commitment to this city.”

If elected Nasmyth’s main task will be to maintain quality service for citizens. Since the city of La Verne has grown, it is Nasmyth’s goal to expand public safety facilities “so that the quality of service isn’t compromised,” Nasmyth said.

Aside from being on the city council, she is a mother, assistant professor of education and assistant program chairwoman for liberal studies at ULV.

However she said she is able to find a good balance with her busy schedule, and she is lucky to have a family that is understanding of her career.

Carder, who has two grown children and has been married for 35 years, earned an accounting degree from Mount San Antonio College and a bachelor’s degree in organizational management from ULV.

She has worked at ULV for nine years as a business manager in the enrollment management building at ULV.

Carder said she thinks it would be nice to have two staff members from the University to represent the school and the city.

Carder has been a resident of La Verne for 30 years, and she has played an active role in the community. She ran in four campaigns, not including the current campaign. Two campaigns included Board Member for the Bonita Unified School District, and the other two included chairwoman for bond election, which supports upgrading facilities for schools. She won all four campaigns.

Carder has been on many boards and committees for the city, and she feels the next step is to run for city council.

“I am really passionate about being involved,” Carder said. “I’ve stayed involved for 30 years, when the seat became available I was encouraged to run by community members.”

Carder’s expertise is to plan, organize and make people happy, according to Carder.

Her passion to help the community was sparked 26 years ago when La Verne was missing an adult tennis group. She is the founder and president of the La Verne Tennis Association.

“I started it because there was a need for an adult tennis group,” Carder said.

Carder’s main concern is to ensure economic stability and preparedness, and public safety. If elected, her goal is to expand the facilities for La Verne police and fire department.

“It will be an honor to serve the citizens on the La Verne City Council,” Carder said.

Traci Attman, administrative assistant for the education program at ULV, is a friend of both Carder and Nasmyth. She has known Nasmyth for 15 years and Carder for four years.

Attman believes that Carder and Nasmyth are both smart and knowledgeable. “They have a real passion for La Verne,” Attman said.

The two other candidates running for La Verne City Council on the March 3 election are Norm Faustini and Charles Rosales. 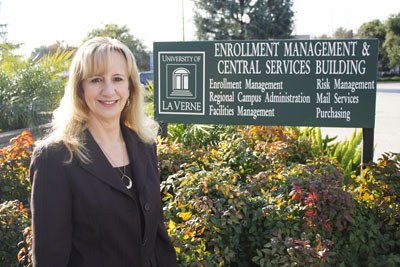 La Verne City Council candidate Robin Carder, who is the vice president of enrollment management at the University of La Verne, has also been a board member for the Bonita Unified School District for nine years. Carder is the president of the La Verne Tennis Association. She is competing for one of two open council seats in the March 3 election. / photo by Rafael Anguiano