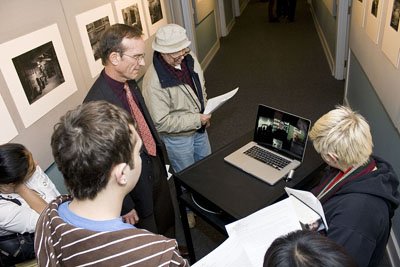 Gerry Pence, Al Clark, Brenda Garcia, Travis Marshall and Sierra Lingan crowd around a computer to video conference with photographers Glenn Hansen and Anthony W. Thompson. The artists virtually attended their exhibition from their respective locations; Hansen was in Chicago and Thompson was in West Olive, Mich. The reception was held Feb. 12 and the exhibit will be on display through March 21. / photo by Rafael Anguiano

Power stations, nuclear weapons plants and video conference technology were all part of the package at the photography reception held on Feb. 12.

“Slow Fire,” the latest exhibit to be shown at the Irene Carlson Gallery, showcased the works of Anthony W. Thompson and Glenn Hansen.

Not only was the work displayed in the gallery, but students were also given a chance to ask the artists questions about their work via video conference.

A laptop computer was set up on a cart that could be wheeled the length of the gallery corridor so that the artists could talk about each photograph in turn.

“This is a first rate exhibition, and I would like to thank Gary (Colby, professor of photography) and Kevin (Bowman, photography department manager) for putting it together,” University of La Verne President Stephen Morgan said.

“They’ve utilized the space well and with the addition of new technology, it’s very impressive.”

Hansen’s photographs depicted the Holman Avenue Power Station in Chicago, Ill., before the demolition of its interior in order for it to be turned into a high school.

In the conference call, Hansen said that his aim was to give the viewer a sense of stepping back in time, similar to his experience when he entered the building and saw personal belongings and books still inside.

“It’s like a piece of history I’ve taken away to share. It’s like going to an archaeological site, brushing away the dirt and seeing what’s there,” Hansen said.

Thompson’s photographs are of the former Rocky Flats nuclear weapons plant outside Denver, Colo., that was demolished during the 1990s and is now a fenced-off wildlife reserve.

He spoke of the difficulties he originally faced trying to enter the plant due to security and how he was unable to enter certain parts of the plant.

“I had to get security clearance, a media pass and I had a guide to tell me where I could and could not go. The hardest part was getting in the first time, but as I made contacts, it became a lot easier,” Thompson said.

“I wanted to give the average citizen’s view of a secret place most would never know about. I liked how the human quality of the place juxtaposed the bureaucracy surrounding it,” Thompson added.

“They did things with photography that I really like. I like the fact it’s about industry and ideas we get about it, and how that becomes irrelevant after a lifetime or so,” Colby said.

Bowman said that although the gallery set up was otherwise fairly typical, the video conference was brand new and enjoyable.

“If helping to set up these exhibits wasn’t a part of my job, I’d still do it, as it is fun. The video conference gives the viewer a chance to meet the artists in a way they would have been unable to previously,” Bowman said.

“I like the imagery a lot, as it’s quite Spartan. I’m also very fond of black and white photography; it’s my favorite,” Le Veque said.

Diane Scott can be reached at diane.scott@laverne.edu.