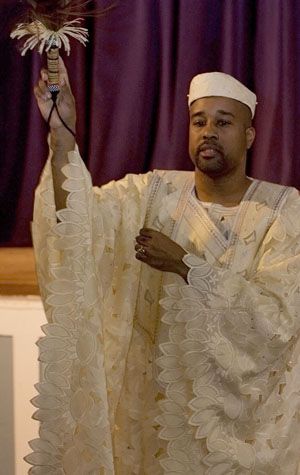 Storyteller Asha’s Baba visited the University of La Verne to share his tales from African cultures. Baba combined music and narrative to capture and charm the audience. He performed in Founders Auditorium on Feb. 19. / photo by Stephanie Arellanes

Asha’s Baba, an African storyteller, entertained his audience with stories, music and jokes on Feb. 19 in Founders Auditorium.

He stood in front of a crowd of about 20 people wearing a formal robe made of silk and cotton and holding a 21-stringed African harp, called a kora, in his hands.

The small crowd allowed him to be more intimate.

“I don’t just get to meet them (people), I spend real time with people all over the world,” Baba said.

Also known as a “djeliba,” which is a respectful term, he is a Djeli, which means a storyteller that speaks the truth and passes along history, culture and traditions.

“It’s a form of teaching without the rationale didactic,” Baba said.

The first story he told was about a young girl who would go to the lake and skip stones. One day as she was walking there she heard a voice telling her not to hurt it. At first she did not know where the noise came from, until she looked down and saw a frog talking to her. He told her that he was a prince and that if she kissed him, he would turn into a handsome prince. She put him in her pocket and went to the lake. After a while the frog became annoyed and told her once again that he would turn into a prince. She replied that she would rather have a talking frog.

The original story is about a young boy and a frog princess, but he changed the story when he brought it to America because the stories must change to fit each society.

“You need to understand that you are the bridge builders,” Baba said.

He told both stories while playing music and singing in between sections.

“My favorite part was when he combined stories and songs,” said Ashley Joseph, the community coordinator for housing and residential life and educational counseling major.

“You always give back equal what someone gives, never less,” Baba said.

“Keep reciprocity in mind, because that’s what Djeli is about,” he added.

Baba was born in America and heard stories of Africa from his great-grandfather and decided that when he was older he would travel to Africa.

“When I went to school there was nothing in my school about my culture except slaves,” Baba said.

He learned to speak Bamanakan, which is one of the 800 languages spoken in Africa. The words he spoke and taught during his presentation were a mix of Bamanakan and Kru, which are from Mali and Liberia respectfully.

He has been a professional Djeli for 15 years, traveling to schools, museums and libraries and sharing his stories and songs.

Sometimes he will perform at festivals and concerts.

He primarily does this on his own, but is sometimes contracted though different companies.

“It just kind of kept taking over my life,” Baba said.

This is not the first time he has performed at the University of La Verne. Joseph saw him perform on campus before and decided to ask him to return. The people attended said they enjoyed learning about a new culture.

“I wanted to learn about a different culture and heritage,” Tony Taboada, sophomore political science major, said. “And the different instruments that are used with the African culture.”

Baba can be reached at www.myspace.com/babathestoryteller.