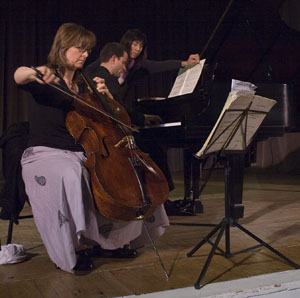 Cellist Paula Fehrenbach and pianist Timothy Durkovic rehearse before their Friday night recital in Founders Auditorium. The artists played three Beethoven compositions, beginning with Sonata Op. 69 in A Major and ending with Sonata Op. 102, No. 2 in D Major. About 40 people attended the concert. / photo by Rafael Anguiano

The music of Ludwig van Beethoven resonated through the floors of Founders Hall as a piano and cello recreated history.

Founders Auditorium traveled to the early 1800s Friday night as pianist Timothy Durkovic and cellist Paula Fehrenbach took the audience on a journey through the life of Beethoven.

“We are taking you through three different periods of Beethoven from when he was able to hear to the time he was completely deaf,” Durkovic said during the recital. “Follow with us through the complete works for cello and piano by Beethoven, part two.”

The duo performed the first part at a recital on campus Nov. 21.

Durkovic began his piano studies at age 5 in Guatemala City and was accepted to the Julliard School in New York. He has been in a range of musical performances and he is an increasingly sought after conductor.

Durkovic used his talent and passion for the piano to convey Beethoven’s message of what his life was like through the loss of his hearing.

Fehrenbach, the cellist, began her musical journey in Green Bay, Wisconsin and since then has been a member of the New World Symphony, Opera Santa Barbara and many others.

Her chamber works are performed in many venues around the world including the Library of Congress.

“Paula is so moving when she plays, you can see her passion through every note that comes out of her instrument,” said Katherine Bacus, three year Kyle Champion cello student.

“She is so inspirational to watch, I am so very glad I came to see her,” said Dawna Snow, three year Kyle Champion cello student.

Fehrenbach was playing a cello from 1793, built around the same time that Beethoven first began composing and performing publicly.

The cello didn’t look to be as old as Durkovic said and definitely did not sound more than 200 years old.

“I feel very privileged to play this cello, it is a great honor,” Fehrenbach said.

Durkovic always gave a brief background of the piece that was about to be played.

It allowed the audience to fully submerge themselves into the music.

“I think he is an amazing pianist and I love how he speaks to the audience about what he is about to play,” Don Linde, a La Verne resident and pianist, said.

“Coming to hear Timothy is like going to a free concert at Julliard,” Linde said. “Where can you get this quality of music for such a low price, it is wonderful.”

The final two sonnets of the evening were part of the grand finale.

Arising from when Beethoven was completely deaf, the sonnets had both romantic and classical roles.

Durkovic said the pieces conveyed passion and romance, equivalent to listening to a love story through Beethoven.

“Sonata Op. 102, No. 2 in D major is the most independent, slow and glorious musical movement of all time,” Durkovic said. “In the depth of all despair Beethoven creates this triumphed phoenix to rise out of the ashes.”

Piano and cello transformed the music into a story of Beethoven’s tragedies and how he was able to rise above them through music.

It was a night where the audience was not just listening to music, but was allowed to reflect on times when they faced their own hardships.

“Durkovic has been missing around here for quite some time, and I think it is evident that he is worth being followed, I am a Timothy Durkovic groupie. I would follow him anywhere,” Linde said.

Samantha Sincock can be reached at samantha.sincock@laverne.edu.