“I am excited about meeting such great and talented people who understand about hard work, and it’s an honor to be here with them.” said Ryan Figgs, a current ULV football player.

Among the crowd, were many from the athletics department including current sports players, staff members, the La Verne Athletics Alumnae Association, coaches, and administrators.

Kline, the athletics director, started the ceremony and continued to speak about each inductee along with Rex Huigens and Bob Dyer, both part of the Athletics Hall of Fame.

“Together we are stronger,” said Kline starting off the ceremony.

Dyer and Huigens introduced the inductees.

Clements, graduated in 2001 as a two-time All-American water polo player. He averaged nearly three goals per game through his two-year career, and was named the 2000 Division III Player of the Year by the Collegiate Water Polo Coaches Association.

“I am glad my mother pushed me to play water polo or I might not be here,” Clements said in his thank you speech to the audience.

Copas graduated in 1988 and has worked as both an assistant coach for women’s basketball, and currently works as part of the business department at Los Osos High School. As a baseball player, Copas was Second Team All-Southern California Intercollegiate Athletic Confer­ence selection after hitting 14 home runs in his first season, and currently ranks third all-time in home runs and fifth in runs batted in.

Lucsko, who graduated in 2003, works as the manager of the Miami office of Industrial Color. She was one of the most decorated track and field athletes in ULV history with seven SCIAC individual championships.

Meza graduated in 2003 with one of the most successful careers in softball. She was SCIAC player of the year in 2001 and 2003. She is the only ULV player in conference history to be named First Team All-Conference in each of her four seasons, and was a four-time All-West Region player. She finished with a career .460 batting average and a school record 252 hits with 179 runs and 392 bases.

Smith graduated with the class of 2004 as both an accomplished volleyball and track and field player. She was the first ULV volleyball player to earn the American Volleyball Coaches Association National Player of the Year honors. She collected 348 kills in one season averaging 3.41 kills per game and a total of 831 kills in her volleyball career.

Smith also went to the NCAA Championships in high jump and javelin, while earning SCIAC individual crowns in both. She was honored as La Verne’s Jesse Iles Scafani Sportswoman of the Year in 2004.

Stewart, part of the class of 1984, earned the honor as both a player and coach at La Verne. He earned All-SCIAC all four years and All-District VIII honors in his last three seasons.

Stewart received the SCIAC’s Ted Ducey Award, and the Anthony P. Scafani Sportsman of the Year Award. As a coach he guided La Verne from last place to first in three years and is the only coach in ULV history to lead his team to a SCIAC title berth in the NCAA Division III basketball championship.

All the inductees took time to thank many important people who contributed to their success and talked about the way the University had changed them and made them a better student-athlete.

“An author once said ‘All I really need to know I learned in kindergarten’, but with all due respect, he never went to the University of La Verne,” Stewart said.

Esmeralda M. Cardenas can be reached at esmeralda.cardenas@laverne.edu. 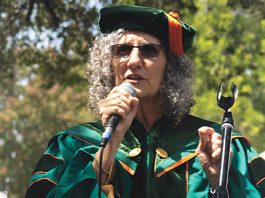