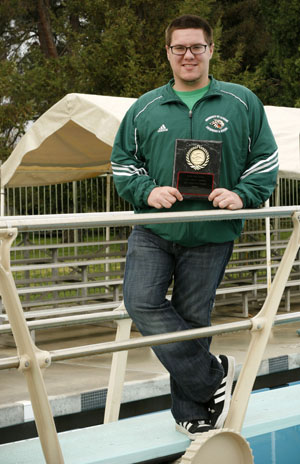 Senior diving captain Chad Loury finished his college career with an All Conference Award in the 3-meter event. Loury has been diving at the University of La Verne for the past four years, and walked away with third place at the SCIAC Conference Finals in Long Beach on Feb. 12. / photo by Steven Bier

An anxious and nervous diver was getting ready to compete in the men’s 3-meter event at the conference finals, when a calming voice reassured him of his potential.

The swim coach approached him and gave him the pep talk of his life.

“You’re the biggest prospect the diving team has, you can do this and everyone believes in you.”

It sounds like a scene out of a movie, but this happened to Chad Loury, a senior television broadcasting major at the University of La Verne, and the inspirational voice that boosted his morale is John Hallman, the University’s swim coach.

Loury went on to win third place in the men’s 3-meter and remarkably won All-Conference honors.

Loury has won many awards in diving and has broken many outstanding records with his time at La Verne.

He not only won first place in the men’s 3-meter at the Southern California Intercolleg­iate Athletic Conference finals, he won all conference in the 3-meter again at the finals.

“My family was there to watch me, and the mini pep talk of Coach Hallman really boosted my confidence.” Loury said.

Loury grew up in West Covina and started diving when he was nine years old.

“I was on a team in Industry Hills for one year and then the coach quit. Three months later I joined another team, but the coach quit again,” Loury said.

He eventually became a member of the Rose Bowl diving team and recalls the big Olympic sized pool they competed in.

“I remember diving off that pool. It was huge but I was not afraid,” Loury said.

He attended Covina High School and was the only diver to qualify for the California Interscholastic Federation, which came as a surprise to him because the school had a very small pool.

In his sophomore year, he placed first in his division and throughout Southern California.

As the swim team captain; he led his team to a league championship.

“I remember when I was getting ready to graduate everyone was flipping out and wondering where I was going,” he said.

California Baptist University was the first campus Loury was considering but after looking at the dorms, he considered other options.

“The dorms were really small and I was used to living really comfortably at home so I knew I was not going to like it there and I wanted to go somewhere close,” Loury said.

“My history teacher went to La Verne and told me to check it out. After I did some research I found out that they had a diving team. It worked out for me because I get to do what I love which is broadcasting and diving.”

“John took me to lunch, helped me with my application and showed me all the things La Verne had to offer,” Loury said.

“A friend of mine was his diving coach in the Rose Bowl league, so I wanted him on our team,” Hallman said. “He is a great guy with a great family and he works for the city as a diving instructor.”

However, not everything went smoothly for Chad this year.

In November, he had to have surgery in his elbow and doctors believed he would be healed by February, which would not be in time to compete at the beginning of the season, but he managed to recuperate and was in the water by Jan. 1.

“I was really scared that he was not going to be able to compete, it was amazing that he won all conference,” Hallman said.

“(Hallman) challenged me as a coach,” Lowry said. “He said he wanted to be at a certain level and I tried my best.”

Due to the rules, a student is allowed to play a certain sport for four years.

Although he will not be diving at school, he is still proud of his success within the program, and looks forward to following the team’s progress in the upcoming season.

Adam Kazub, a junior and now former teammate of Loury is really happy to have had Loury as a captain and inspiration.

“He took me under his wing and persuaded me to dive. He is a very motivated person who always looks at the bright side of things,” said Kazub.

For now Loury plans on continuing his education and is still hoping to have a future in diving.

“I am really sad that the season is over. If I want to keep diving I will have to join Club Masters Diving which is like a club for adults. Nobody wants to see me quit,” Loury said. “The coach for Pomona-Pitzer always says that we have to keep diving.”

“I want to thank my family, friends and my girlfriend for everything they have done for me especially before my last meet when everyone came out to see me. I just know I want to keep diving,” Loury said.