By Natalie Veissalov, Rafael Anguiano on March 6, 2009 in LV Life 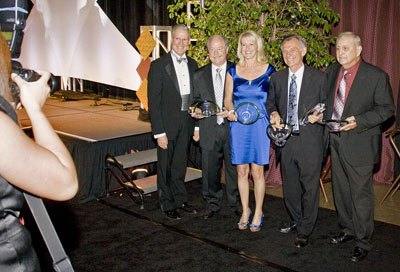 After the awards presentation, President Steve Morgan, La Verne City Council members Don Kendrick and Donna Nasmyth, Mayor Jon Blickenstaff and Council member Robert Rodriguez pose for a photo by Nancy Newman. This year’s President’s Gala was held Saturday at the Fairplex Sheraton Suites in Pomona to thank the donors who donated money to the school. The night began with an opening speech by Ciriaco Pinedo and closed with a dance with music provided by the band Sweet-Heat. / photo by Rafael Anguiano

Faculty, staff and donors dressed in formal attire, gathered to celebrate the completion of the five-year, $42 million Building on Excellence Campaign at the President’s Dinner Gala on Feb. 28 with a Brazilian inspired theme.

This year’s President’s Gala had a different role than the past President’s Galas. The past galas had raised money for various things, such as scholarships and academic programs.

This year’s gala was more of thank you to ULV donors.

“We wanted to take a moment to say thank you and honor the city of La Verne,” Morgan added.

According to Morgan, the City of La Verne has grown up with the University.

Morgan explained what the campaign means for students today and in the future.

If the University did not have these generous donors it would be impossible for students to have sufficient financial aid, support academic programs and build the Campus Center, Morgan said.

“It feels natural when you truly believe in something; you want to get behind it anyway you can,” Myrna Wheeler, member of the board of trustees and chaplain of Hillcrest Homes, said.

According to Wheeler, the money donated does not need to go towards a “glitzy building,” it can go towards paying for scholarships, faculty salaries and something as small as electricity.

Wheeler explained that for a while she could only give a little monetarily.

She gave to ULV in service in order to help the University.

Now that she has more financial resources, she wants to give even more because it is so important, Wheeler said.

“When you are blessed you want to give,” Wheeler said. “One of my first blessings was being at La Verne College.”

“I am very enmeshed in campus life,” Wheeler, who has been on the board of trustees for 20 years, said.

Since the President’s Gala honored the City of La Verne, outgoing Mayor and La Verne College graduate Jon Blicken­staff accepted the award on behalf of the city.

“On behalf of the city, we are highly honored to be part of this gala,” Blickenstaff said. “This honor tonight is so greatly appreciated.”

According to Blickenstaff, the University is high on the list of partnerships the city of La Verne has.

“Education is key to a successful and effective society,” Blickenstaff said.

He said that supporting the University is very important.

Nicholas Gonzalez, a senior psychology major, also gave a speech offering his thanks to all the donors.

Gonzalez is an example of what is possible when generous donors make donations to the University.

The guests enjoyed a dinner of Brazilian cuisine, which included plantains, rice, salmon, beef brisket and pork loin, and they danced to a Latin jazz ensemble.