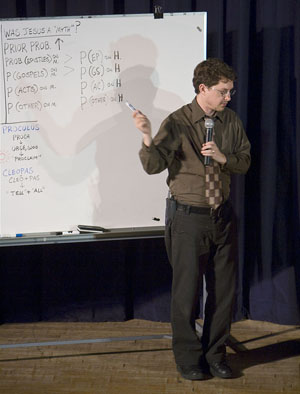 Is Jesus myth? This was the primary question Richard Carrier grappled with in his two-hour presentation at Founders Auditorium. Carrier holds a doctorate in ancient history from Columbia University and has written several books as well as articles for newspapers and magazines. / photo by Rafael Anguiano

Nationally renowned author and speaker Richard Carrier left guests either enlightened or bewildered Monday night as he presented his lecture, “Did Jesus Even Exist?” to a crowd of more than 100 in Founders Auditorium.

Carrier, who holds a doctorate in ancient history, presented his research on Jesus and the Bible, which he theorized holds possible evidence that Jesus never existed.

“The evidence isn’t clear cut,” Carrier said. “We can’t fully trust that the (Bible) was meant to be taken literally.”

Carrier began his presentation by sharing an excerpt from the Book of Mark in the New Testament, which he believes tells a mythical, symbolic story about Jesus being chosen to die over a convicted murderer, Barabbas.

“By choosing Barabbas to live, we choose sin? This is historically implausible,” Carrier said, who contends much of the book of Mark is a parable.

Beside Carrier on the platform was a large white board featuring a “Rank Raglan Scale,” which classifies top traditional heroes who share the most mythical characteristics.

Ranked at No. 1 was Oedipus, who is most unlikely to be a historical person. Following close behind was Jesus at No. 4.

Among the criteria used to determine each hero’s ranking were affirmative responses to whether the hero’s mother was a virgin, an unusual circumstance of conception or being hailed as a king.

“The probability of the people mentioned on this list being real is very low,” Carrier said.

He went on to describe how the Epistles of Paul never describe Jesus in detail as an actual person but more as a celestial being.

According to Carrier, many scholars believe that the Epistles are all myths because it never mentions Jesus’ location, miracles he performed or words he spoke.

“It is not implausible that Paul described Jesus as a myth,” Carrier said.

Observers were provided with handouts of quoted passages from the Bible that Carrier referenced throughout the evening.

After speaking for about 90 minutes, Carrier concluded his presentation saying he had “only touched the tip of the iceberg.”

However, audience members requested that he revisit that iceberg during the question and answer session.

Van Perkins, a San Dimas resident, was first to come forward with a few questions for Carrier.

He mentioned the Book of Acts Eight, where an Ethiopian eunuch asked Philip for help in understanding which person was being described in the Book of Isaiah.

Philip tells the eunuch that the passage is about Jesus.

“If Philip explained to the eunuch that the Book of Isaiah was about Jesus, how can Jesus be a myth?” Perkins said.

“Why would Philip or others of that time period propagate a myth about Jesus that the Romans could potentially kill them for?”

Carrier’s response was that the passage in Acts Eight was also a myth and that there could be no conclusive answers about Jesus in one night.

“There is no smoking gun,” Carrier said. “I would like to see the consensus give more attention to the mythological possibilities.”

Another audience member asked why this evidence matters in terms of the big picture.

“It matters to me because I like packaging an idea to present to other scholars who would appreciate my research and who do not have the time to do it themselves,” Carrier said.

At the two-hour mark, the lights on the platform went dark and guests roamed about the auditorium, some stopping to purchase his book, “Sense and Goodness Without God,” others exchanging opinions about the lecture with one another.

“I was excited to see a great turnout from other schools,” she added.

Turrisi is vice president of the campus religion and philosophy club, The Most Greatest Club Ever, which sponsored the event.

She said the club had sent invitations to surrounding schools in the area.

“I walked away with the same disposition towards the subject that I came in with,” said social sciences major Jonathan Serrano from Cal Poly Pomona.

Carrier, a graduate of Columbia University, is currently working on his next book, “On the Historicity of Jesus Christ.”

For more information on, visit richardcarrier.info.

Those who missed the presentation can catch it on LVTV-3 in two weeks.