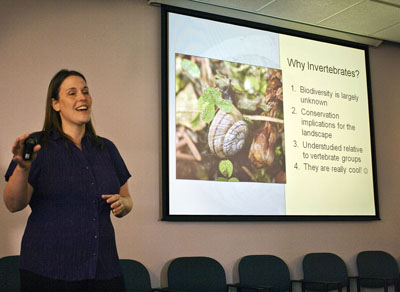 Kathleen Weaver, assistant professor of biology, presents her research on sonorella and oreohelix snails at her faculty lecture series talk on Tuesday in the President’s Dining Room. Weaver studied the snail species found around the University of La Verne’s Montana Research Station, trying to determine if there was more than one introduction of snails in the area. Because they are slow-moving animals the snails are excellent reflectors of their surrounding environment. / photo by Rafael Anguiano

Kathleen Weaver, assistant professor of biology, lectured on her recent studies of the sonorella and oreohelix species of snails for the faculty lecture series Tuesday in the President’s Dining Room.

When asked why, of all the species, she chose to focus her research on the oreohelix, Weaver responded, “No one’s ever heard of it, so no one can compete with me.”

“I chose to study invertebrates because their biodiversity is largely unknown. They are relatively understudied to vertebrate groups,” Weaver said.

Both subspecies of snails are found in Montana.

Weaver’s presentation was dedicated to the biogeography and conservation genetics of both species.

Conservation genetics attempts to understand the genetic relationships of a particular species.

“After working with them for so long, you kind of begin to think that they’re cute,” Weaver said.

She presented a detailed PowerPoint, covering the issue of conservation along with the species’ significance to its environment.

The oreohelix is integral to its direct ecosystem, as it indicates the ecosystem’s overall health.

She performed a majority of her field work in the summer of 2006 at the Montana Station, where the University of La Verne was designated an office, more specifically, in the Magpie Ranch Facility.

There, Weaver and her team collected live individuals from 15 populations in Montana and six out-group populations, in mountain ranges surrounding the station. Weaver discovered a close genetic relationship between two groups of oreohelix.

A group found in Montana held nearly identical traits to a group of oreohelix, found 670 kilometers away, in Idaho, concluding that the connections occurred because of dispersal.

Aside from this discovery, Weaver and her team found 3 unknown new species in an isolated area.

“I tend to be conservative when it comes to naming (new species),” Weaver said.

“I always start by calling them ‘unknown,” she added.

“I’d like to put a major focus on both my teaching and my research,” said Weaver, who in the summer of 2009 will return to the Montana Station where she and her team hope to further their studies.

“I thought it was exceptionally good and very comprehensive,” said Robert Neher, professor of biology.

“It really gives you an idea of what the scientist does to learn about the animals,” Neher added.

“People don’t realize that certain animals, even ones that seem as insignificant as snails, play a crucial role to the environment,” said Natasha Lo, a senior business major.

“(She) really got her point across.”