By Campus Times Editorial Board, Michael Escañuelas on March 13, 2009 in Editorials, Opinions 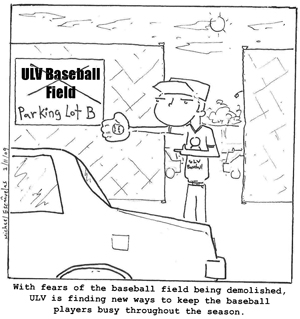 The recent construction of the Campus Center, the troubled economy and ULV’s issues with deferred maintenance have left various ULV sports teams displaced.

In fall 2007 the University turned the tennis courts into a parking lot, forcing the tennis team to go elsewhere to practice and play ever since.

For quite some time, the track and field team has not been able to compete on its home track, because it is difficult for the track players to run on its uneven surface – and the track doesn’t meet NCAA regulations. This problem stems from an engineering error that took place in 1972 when the Supertents were built. First Street was effectively buried intact under the track. With the construction of the Tents on the previous track site, and the subsequent move of the track to its present location in the early 1970s, the street under the field was not removed. Consequently the underlying asphalt traps rainwater and causes it to percolate back to the surface causing it to bubble up.

Recently the baseball team is also having some problems. The construction of the Campus Center has blocked direct access to the bleachers, forcing spectators to enter the stands by walking right across the field in between innings.

This could slow the pace of the game, it affects the baseball players’ warm up between innings, and makes it tough to go out and get foul balls from the construction site. The players have to wait to return the baseballs during the game.

One would think these pressing sports issues would trigger some action. But the tough economy is only making matters worse. The school is having a hard time coming up with money to fix these problems.

And donors are not giving as much as they were before.

Although correcting the problems with the athletic fields, which in some cases means building entirely new fields, is on a priority list of projects, it may be several years before these issues are resolved according to Campus Development.

The school is focusing limited resources on other issues, namely getting the Campus Center up and running. There is not enough funding to resolve these sports issues just now.

The Campus Center is supposed to be a big draw to bring in new students.

However, we feel that functional, even attractive sports facilities are at least as important as a swanky new student center and would go a long way toward attracting new students.

Many thought the Brown Property, an off campus location on the other side of Arrow Highway, would be a solution for relocating these sports facilities, such as the tennis courts and track and field.

But currently the land is largely undeveloped and its future is uncertain.

Because of the bad economy, the University might plan on selling the property, and use the money to develop the east side of the canal.

The projected sports complex, which would be located south of Arrow Highway, would be intended to accommodate the softball team, baseball team, tennis facilities and any other miscellaneous sports activities.

However, the completion deadline of the sports complex has been postponed to January 2018.

Yes a student center may be an important addition to our small campus. It may even make the whole place look better.

However trading athletic fields and at-home games to pay for the shiny new center seems a high price.

Athletics is one of the things that drives many students to a certain college, and without athletic facilities here, prospective students may look to another college.

Also, since there is no funding available at this moment, the University should think of alternative, cheaper solutions in the mean time.

It is not fair for the athletic program to suffer.

Since the tennis and track and field teams do not have home games, many student fans will not attend these games because of the transportation issues and the inconvenience.

And these teams need all the support so they can get to achieve their maximum potential.

It is crucial that these sport facilities be given back to the players, in order for players to continue to become successful on the field.

We hope there are some solutions to these problems.