By Aaron Braunwalder, Stephanie Arellanes on April 3, 2009 in Sports, Tennis 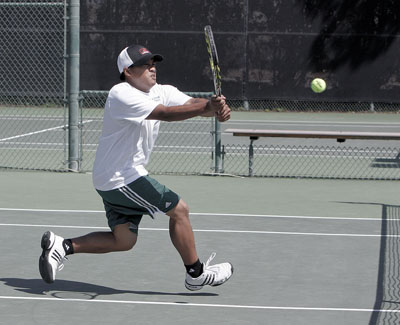 Senior Adrian Laygo of ULV charges to return a volley against Biola. Laygo and freshmen Mark Rivas provided the only point with their doubles match victory. The match took place Wednesday at the Claremont Club. The Eagles routed the Leopards, 8-1. / photo by Stephanie Arellanes

La Verne was back on the courts Wednesday as they hosted Biola at the Claremont Club. However, La Verne’s frustrations continued as they were easily downed by Biola, 8-1, leaving La Verne winless so far this season.

The match began with La Verne’s Richie Delgado and Nick Mitzen­macher competing in the No. 1 doubles match.

La Verne’s No. 1 team seemed to be out of sync as Biola jumped out to a quick 1-0 lead.

La Verne battled back in the second set taking the lead, 2-1. Biola would answer back quickly, though, reclaiming a lead, 3-2.

The Eagles did not look back as they held the Leopards scoreless for the remaining sets, winning in convincing fashion, 8-2.

“We’re not executing as well as we could be,” Delgado said.

Mitzenmacher replaced Alex Muresan due to his ongoing pectoral injury.

“I need to focus more on my volleys, we need to be more patient and let them make the mistakes instead of us,” Mitzenbacher said.

The final doubles match ended on a high note for the Leopards as the pair of Adrian Laygo and Mark Rivas came out with a victory, giving La Verne a confidence boost going into singles play.

“This win helps out a lot with our confidence, having the momentum helps out a lot, we have been struggling this whole season but we finally got it done,” Laygo said.

“A win under your belt always helps improve your game from a mental aspect, I am really excited for the guys. It’s a big win,” assistant coach Lacy Cascadden said.

La Verne’s success was short lived as the Eagles swept the Leopards in singles play with Biola winning in convincing fashion, 8-1, improving their overall record to 3-12.

Rivas could not repeat his doubles success dropping his singles match, 6-4, 6-1.

“We need to do some more work on the court, we need to have a positive attitude and keep focus on what we’re trying to do,” Delgado said.

The Leopards lost the match, 8-1, putting their overall record at 0-17.

In search of their first victory, La Verne will be back in action at 2 p.m. Friday, taking on conference rival Pomona-Pitzer in Claremont.

La Verne will then play another conference match against Occidental at 2 p.m. on Saturday at the Claremont Club.

Future students spotted
In a tough economy, some travel deals