By Julissa Cardenas, Rafael Anguiano on April 24, 2009 in News 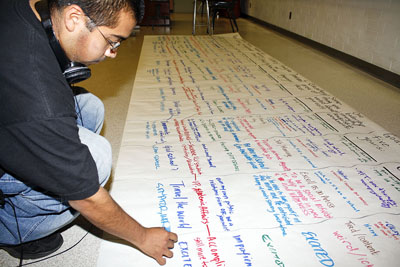 Recording his answers to several questions, Daniel Perez participates in the Second Annual Latino/Latina Retreat sponsored by the office of multicultural services held on April 17 in La Fetra Auditorium. / photo by Rafael Anguiano

Daniel Loera, multicultural affairs director, was in charge of the event which started at 1:30 p.m. and the themed, “Gana Con La Educación!” (Win With Education).

Although more students were anticipated, about 30 students attended to make a small intimate group.

There were breakout sessions where the students and faculty discussed topics on their views and opinions on racial profiling, their own perception of themselves and society’s notions. Some students were there to find answers and ultimately found a little bit of themselves in the process.

Fatima Suárez , a sophomore criminology and speech communication major, was part of the planning committee and was ready to find some answers.

“I never questioned why I use my ethnic label, or why others choose other labels. I would like to know what connotations are used, and I’m ready to get this started,” Suárez said.

“As I was walking over here I thought, what a dull world this world would be if we were all alike,” Morgan said. He went on to speak about the University’s diversity and what it has to offer to minorities.

Along with students and faculty, Loera brought in guest speakers to educate the students on the struggles of growing up with a Latino background, by overcoming adversity and reaching their goals.

Alas is in the department of biological sciences at Cal Poly Pomona, Arellano is the principal at Arellano Associates Professional Consulting Services, Burgos is the associate director of corporate relations for the Children’s Hospital of Los Angeles, Sanchez is a teacher specialist and administrator and Hernandez is the mayor of West Covina.

Each of the speakers recalled their life story, and gave advice to the students in hope that the students will find their own personal success as well.

“Regardless of whether you do something or not, time will still pass you by so you might as well do something about it,”‘ Arellano said.

After the speeches, the group went into exercises where they all questioned their ways of making decisions and why they make those decisions. With not much time to spare, the group did not have time to address their issues to the faculty, but decided to go on the dinner part of the event.

The dinner took place at Fasnacht Court where ceviche was served along with beans, rice, salad and enchiladas. For dessert, there were churros and flan.

Founders Auditorium due for a facelift
News Briefs