By Campus Times Editorial Board, Michael Escañuelas on April 24, 2009 in Editorials, Opinions 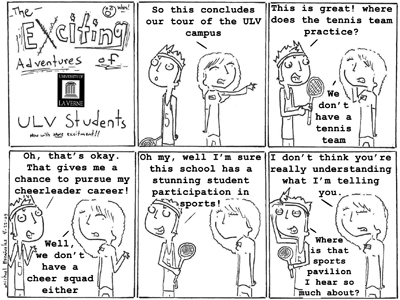 The cancellation of the men’s and women’s tennis teams has caused a stir among the coaches and players. And yet the reason for the team’s cancellation still doesn’t add up. According to Interim Athletic Director Julie Kline, the reason for canceling both tennis teams was not because of the budget, it was because of facilities. Kline also said in a presentation on Tuesday, in which University of La Verne President Stephen Morgan spoke, that having no official facility for the tennis teams to play is embarrassing when touring and recruiting prospective student.

If the reason is not the budget, then providing facilities for the tennis team to practice and host games should not be a problem. Since money is not problem, the University should build a new facility for the teams to practice and play, instead of canceling the teams.

Those making the decision to cut the tennis teams seem to forget that during the renovation of the Sports Science and Athletic Pavilion in spring 2006 when the basketball and volleyball teams had nowhere to practice, those teams were not cut.

When the University cancels a sport because of inadequate or unavailable facilities, it does not show a very good picture for the school. It shows that the University has no interest in its sports and its athletes.

Although Kline said that the priority is for the student athletes to have the best athletic experience possible, taking away the tennis teams does not help the situation. In the presentation earlier in the week, tennis players in the presented a slideshow, a 20 minute movie and tried to convince Morgan and the rest of the athletic department to keep the tennis teams.

However, Morgan and the athletic department continued to say the same thing and stayed with their choice of canceling the tennis teams. They were not open to changing their minds. They should be more supportive, optimistic and do all they can to save the teams.

Also in the presentation, the tennis players showed them a plan, which might help save the tennis teams. The tennis teams asked if it is possible to come back if the teams are able to get an official statement from the Claremont Club agreeing that the tennis teams can use its facilities free of charge.

The tennis teams said it is very likely the Claremont Club will send an official statement stating this. Some were optimistic and saw it as a possibility, but there were some who felt it went against the philosophy of the University.

If the University continues to cut facilities, are other sports going to be cut and eventually canceled? If this does become a reality, what does this mean for the future of sports at ULV?

Under the influence of faith and confusion
Reduce your water usage