By Megan Sebestyen, Michael Escañuelas on May 8, 2009 in Health & Fitness, LV Life 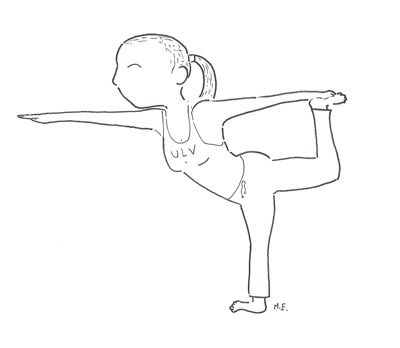 Everyone in the room is held silent, captive, commanded when to move and when to breathe by their leader. Muscles strain, fighting against the unnatural, uncomfortable positions in which they must remain and limbs shake with sheer effort. The room is dark and only shadows of people can be seen as they each bow in motion following their leader. The people in this room are not, however, held against their will. These people have paid money, in some cases, quite a lot, just to be in this very room. Many of the members of this group might even describe their attendance as a positive step toward a healthier lifestyle. The people in this room are yogis, held captive by an instructor as they try to find inner peace and strength through a series of movements.

“I believe that yoga is about working on yourself,” Silver Lake Yoga instructor Jill Zepezauer said.

Yoga has become a trendy way to remain fit, both mentally and physically. My co-workers diligently trot off to weekly yoga classes, often making the class a priority over social invitations. Too often I have heard co-workers complain about their financial woes and inability to pay credit card debt, all the while ignoring the $10 they shell out at every yoga session. I have always considered myself a skeptic of yoga; unsure of how a seemingly stationary activity could possibly improve my physical well-being. As for claims I heard about yoga improving relaxation, I scoffed. I did not need to close my eyes and chant to find inner peace. So in the interest of finding what made people so attracted to yoga, I agreed to take some classes. Could yoga change me?

Yoga has steadily gained popularity among every demographic: business executives, celebrities, athletes, parents, kids and even pregnant moms. In 2005, the “Yoga Journal” commissioned a survey by the Harris Polling Firm. It indicated that 16.5 million people (7.5 percent of U.S. adults) now practice yoga, an increase of 5.6 percent from the year before and 43 percent from 2002. Another 25 million people said they planned to try yoga within the next 12 months.

“It’s been said that all you need to practice yoga are your body and your mind,” yoga instructor Dana Marcoux said. “The greatest lesson about yoga is that one can pause at any point to process the experience. A seemingly simple experience can become infused with energy and spirit.”

The area surrounding my Los Angeles apartment is engulfed by health-conscious, upper class inhabitants who spend a substantial amount of time and money at yoga studios. Because yoga is so trendy in this area, I found a great deal of yoga studios that offered classes for all levels and all price ranges. I decided to try five different styles of classes taught by five different instructors as a sample. I would take a beginner’s class, a flow yoga class, an Iyengar class, a meditation class and an advanced level class.

Developed in India 5,000 years ago and brought to the United States in the early 20th century, yoga experienced an initial surge of popularity in the 1960s and 1970s. Once thought of as “groovy” or something only hippies participated in, yoga has transcended all previous barriers to enter the mainstream. According to a study by Americans spent $2.95 billion on yoga classes and products in 2004, the Harris Survey said.

After some research I found a yoga studio that fit within my budget at $8 a class. Starting with a beginner class seemed reasonable and so that is how I found myself seated rather uncomfortably in a chilly room that smelled of sweet blossoms listening to nothing but the quiet hum of the room. The session began when the instructor asked us to close our eyes and take inventory of any physical or mental aches or pains. Once I settled in to the sticky floor matt and closed my eyes, I noticed several things: my toenail polish was peeling, I had goose bumps on my arms and my hair tie was coming loose. For me, the quiet of the room incited a sense of unrest and my thoughts flitted from one meaningless subject to another. It was then I realized that yoga takes a great amount of discipline; controlling my own mind was something I would have to practice. Perhaps because my mind is so accustomed to the over-stimulus of my everyday life, I found I could not keep it still.

“Yoga, an ancient but perfect science, deals with the evolution of humanity. This evolution includes all aspects of one’s being, from bodily health to self-realization. Yoga means union: the union of body with consciousness and consciousness with the soul. Yoga cultivates the ways of maintaining a balanced attitude in day-to-day life and endows skill in the performance of one’s actions,” B.K.S. Iyengar said in his book “Astadala Yogamala.”

Once we started moving, I found myself in a series of postures that seemed relatively simple. As I looked around the room, the other participants appeared to be sitting comfortably and naturally. But inside, deep from within the core of my muscles, I began to feel heat, followed by a slowly spreading pain. The pain wasn’t outright, more like the sort I would experience in my thighs after climbing a flight of stairs. The instructor asked the class to make small adjustments and focus on specific areas. While sitting crossed legged, I consciously made adjustments to my breathing, my stomach, the arch of my spine, my neck, my chin, my elbows and my shoulders. I allowed my tongue to relax and I took each breath slowly. This simple act of sitting required so much attention to my body that I found it strenuous.

Marcoux said yoga will achieve both physical and mental fitness through an improved mind and body connection. The process of holding certain postures can be difficult and require strength and concentration. The process of concentrating on the pose takes the mind off of daily worries and stresses and creates a kind of meditation.

As the class continued and the activity level built, the previous thoughts that had distracted me were no more. The remainder of the class my mind worked to balance my body, always making adjustments until the pose became difficult. I soon found that if I felt no heat in my limbs while holding a pose, I wasn’t doing it right. Even if I found a moment of comfort or peace, I scrambled to incorporate another adjustment. Keeping up in the class was simple, though actually following the instructor’s advice for adjustments and alignment in each pose required more than my mind and body could handle.

According to “Popularity of Yoga and Pilates Increasing Among ‘Boomers,’” yoga is more than just meditating while moving through a series postures. There are 27 different varieties practiced in the United States currently and as demand increases, more styles are developed. Yoga programs exist for a medley of groups. There are classes for children to help with concentration and hyperactivity, classes for a strenuous physical workout, classes focused on meditative activities to aid in stress relief and classes for injured athletes who need to maintain a workout regime. There are yoga varieties for people who suffer from stress and anxiety and for seniors wishing to increase flexibility, posture and bone mass.

After leaving my first yoga class, I felt oddly rested. The physical exertion my body had survived in the past 90 minutes left me feeling worn out, though not worn down. Endorphins that only follow a good exercise kicked in as I squinted in the bright sun leaving class, suddenly aware of the intense light and barrage of sounds that reached my senses. After spending time in a quiet, safe setting, returning to the “real world” made me all the more aware of how overwhelming it could be. My tired muscles told me that I had been through a good workout and tiny, previously undiscovered muscles made their presence known by complaining of pain. In all my years as an athlete playing soccer, running track, lifting weights and biking, I had never felt the presence of so many muscles. A single yoga session brought to life the muscles that had been unnoticed all my life.

For my next yoga class, I decided to focus on a style of yoga. Iyengar yoga is the most popular form practiced in the United States and is credited to B.K.S. Iyengar.

Iyengar began teaching yoga in 1937 and eventually gained recognition for introducing yoga to the West. Time Magazine named Iyengar one of the most 100 most influential people in the world.

The Iyengar class I took emphasized the importance of holding a pose correctly. This class caused muscle fatigue and I found my limbs shaking while I struggled to maintain the correct posture. I left the class feeling exhilarated by a successful physical effort. But later that night, while at work, I began to feel a tightening of muscles. It gradually started in my shoulders and moved through my whole body until I became so sore that no task was comfortable.

Marcoux said too many people dismiss the physical aspect of yoga. Working on small, usually underdeveloped muscles groups creates a physical awareness of a body’s full range of motion. People use the same muscles over and over again in daily routines or even exercises, but taking a yoga class forces the use of different muscles. This focused concentration on muscle groups in yoga can translate to better posture, greater flexibility and even better organ function. Those who suffer from physical ailments, injuries or fatigue can benefit from yoga as it promotes awareness of the whole body.

“Yoga teaches us to cure what need not be endured and endure what cannot be cured,” Iyengar said.

The advanced yoga class I took was a lesson about respecting the complexity of yoga. I will never again scoff at the concept of yoga being a form of physical exercise. During this class we moved through advanced versions of poses and went so swiftly that I found it more like a strength-building Pilates class. Poses such as balance poses require so much physical strength to maintain that I found my body incapable of completing them. The instructor prompted the class to relax, though I found even my mind was incapable of focus. The class left me feeling sorely disappointed about my inability to control my mind and my body sore. To keep pace in an advanced class I would need to build up the muscles used in yoga, muscles that cannot be built in any other activities. I would need to build my mental focus as well.

My experience with a sample of yoga left me more than curious to try more. After only one week of yoga, I found myself taking note of my physical state. When I slouched in a chair, I noticed. Perhaps since I had spent some time practicing perfect posture, now I can tell when my posture is lazy. I would not say that I find yoga does initiate relaxation, though I would explain that I experienced a greater sense of awareness and clarity after exiting the yoga studio. During a yoga class focusing on only mind and body was a difficult task, but one that left me feeling I had performed a beneficial exercise. Yoga is a rewarding physical and mental challenge. I believe practicing yoga would be beneficial. Though I am not ready to become like my co-workers and place yoga at the top of my priorities, I will no longer scoff at the commitment to yoga.

Megan Sebestyen can be reached at megan.sebestyen@laverne.edu.