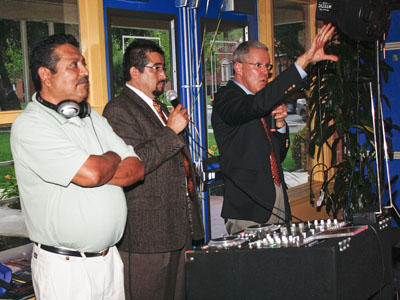 The Latino Student Forum presented its 20th annual Bienvenida event consisting of dinner, awards, and a dance on Saturday. Crescencio Gonzales, adviser of the Latino Student Forum, introduced Stephen Morgan who congratulated the club on the decorations at the dinner and for celebrating its 20th year. The DJ for the dance was Luis Lopez, a cook in Davenport Dining Hall. / photo by Rafael Anguiano

The Latino Student Forum hosted its 20th annual Bienvenida on May 2 to recognize the people that have made a difference in their lives and the La Verne community. Bienvenida is an event where Latino students can bring family, friends and people they admire to show them the University of La Verne and show them some appreciation. This year’s theme was “March of the Heroes,” with a special Hall of Fame display in the President’s Dining Room.

The members of LSF chose 20 heroes and displayed them throughout the PDR for people to see and read about.

Each hero had a biography and a picture for those who did not know about them to learn about them. Some of the heroes include Cesar Chavez and Selena.

On the wall the pictures of personal heroes that people submitted were projected on the wall. The display lasted for the entire event.“Just so they know that they’re strong efforts don’t go unappreciated,” said Julie Flores, a sophomore international business major with an emphasis in Spanish language and newly elected director of fund-raising.

The event started with a welcome by Crescencio Gonzalez, the assistant athletic director for facilities and head coach of the men’s soccer team.

He hosted the night speaking in both English and Spanish for the guests. The entire ceremony was presented in both languages.

Directly after guests were greeted to the night, the dinner of cheese enchiladas, beans, rice and beef fajitas was served in the West Dining Room. The colors of the evening were red, black and white.

As the guests ate they were treated to music and a slideshow of pictures showing the different events LSF had this year. It was a time for people to socialize with each other. There were laughs and moving mouths for the entire time.

“Because I am Latina and I came to support my fellow Latinos,” said freshman legal studies major Jennifer Lemus-Fernandez.

After most of the guests had eaten, it was time to begin honoring people. First on the agenda was recognizing the new Executive Board for next year. The positions from this year’s E-Board gave roses to the newly elected members as congratulations.

“I expect them to be outstanding and successful,” said Fatima Suarez, a sophomore criminology major and former director of publicity.

Suarez hosted the awards section of the evening. Latino students of La Verne as well as Latinos in the community were recognized for different awards. Some of the awards included the student leader award, academic excellence and Corazon award.

Each recipient received a framed description of the award and a personal present.

After the formal portion was over, the fun began. The tables in the middle of Davenport were moved to the side and guests moved their feet from 9 p.m. to midnight.

“It was formal and now we get down,” Ramirez said.

The event took a little over two months to plan. After they had their winter retreat, they decided it would be best to begin planning as soon as possible.

“But we all came together as a big family and managed to put on an event,” Flores said.

Although 135 people were suppose to show up, they were happy with the people that did show up.

“I am really glad that people were here to support us,” Suarez said.