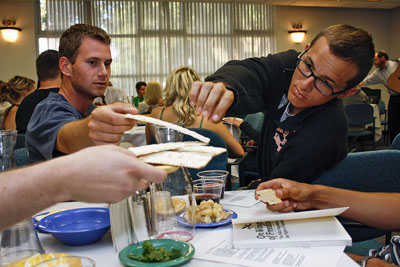 Matzah, parsley and horseradish were used during the Model Seder in the President’s Dining Room on Wednesday by University of La Verne golfers Mitchell Fedorka and Matt Bernal. Matzah is eaten during Passover to remind people of the hardships the Jews suffered leaving Egypt. It also signifies the hastiness with which the Jews departed, since they had no time to prepare leavened bread. / photo by Rafael Anguiano

Guests were treated to a ritual with songs, food and symbolism for the Model Passover Seder on Wednesday in the President’s Dining Room.

Passover commemorates the story of Moses and the Jews’ exodus from slavery in Egypt.

“It’s a celebration of freedom from slavery,” said Don Pollock, professor of communications, who has organized the event for the past 10 years.

A seder is a traditional Jewish meal in celebration of Passover, which this year was April 9-15 this year.

Usually Pollock schedules the model seder for just before the holiday. Because of spring break and scheduling conflicts this year, the event was moved to Wednesday which coincides with Israel’s independence day.

The evening began with songs from Paul Buch, the cantor from the Temple Beth Israel in Pomona. He sang some songs in Aramaic and encouraged all to participate.

When he was finished, Tammy Schneider, a religion professor at the Claremont Graduate University and leader of the evening ceremony, lit two candles and led the group in prayer.

Schneider then ceremonially washed her hands and moved on to the first of the 15 rituals that are performed at a seder.

“There’s an order,” Buch said. “It’s the same every year and it’s different every year.”

The first of four glasses of wine is drunk. The four glasses represent the freedom the Jews have because when they were slaves, they could not drink.

Since the University of La Verne has a dry campus, grape juice was served instead.

The wine must be drunk while reclining to the left.

Following that, the food enters the picture. Guests dipped parsley into a bowl of salt water. The parsley represents rebirth and the salt water represents the tears the slaves shed. This is done in acknowledgement not only of Jewish slavery in Egypt, but also of slaves today in other parts of the world.

“We can’t forget the suffering of others when we are joyous,” Schneider said.

Schneider then took one of the three pieces of matzah from the seder plate and broke it in half.

One half, called the afikomen, will be hidden later for the guests to find. Usually, parents hide it from their children because they must find the afikomen to have dessert.

The other half is shared among those that are present. The matzah is eaten because when the slaves fled Egypt, they did not have time to let the bread rise, so they ate flat bread. It is known as the bread of affliction.

The next cup of wine is taken and the children ask the four questions, beginning with, “Why is this night different from all other nights?” They ask about the significance of the matzah, dipping, herbs and reclining.

This leads into the telling of the exodus from Egypt. Participants took turns reading passages from the Haggadah, the seder prayer book.

Students were selected to represent the traditional four children in the Haggadah: the wise child, the evil child, the simple child and the child that does not know how to ask.

Buch lead participants in another song about the 10 plagues that were cast on Egypt.

It was a very upbeat song that the audience sang and danced to while sitting down.

Travis Case, a junior religion major, said his favorite part was the singing.

Schneider continued the ritual by showing everyone the seder plate. On the plate was a bitter herb that represents the bitterness of slavery, a roasted egg that represents new birth, a lamb shank bone that represents the lamb whose blood was used to mark the doors during the last plague of Egypt, another fresh herb, matzah and charoset, a mixture of fruit, nuts and wine.

At this point, the seder stops for dinner. During the course of Passover, observant Jews are not allowed to eat leavened bread or any food that contains bread products.

After dinner, the last parts of seder commence. First was the search for the afikomen, which was found by Dylan Haro, a junior psychology major.

Ariel Epstein, a graduate student, said her favorite part of the seder when she was a child was finding the afikoman. She would get a dollar if she found it.

The third cup of wine was then drunk. Although this was not performed at the Model Seder, a cup of wine is generally filled for the prophet Elijah and a passage is read as an invitation for him to enter the home.

Another song is sung to sing the praises of Elijah.

A fourth cup of wine is finally drunk.

“Technically you’re supposed to be drinking four glasses of the wine, so by the end you don’t know what the seder is about,” Schneider said.

The University began hosting the Model Seder about 30 years ago to recognize the Jewish community on campus.