By Aaron Braunwalder, Rafael Anguiano on May 1, 2009 in Baseball, Sports 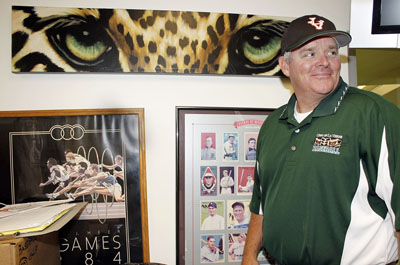 In his ninth season of coaching for the La Verne Leopards baseball program, Scott Winterburn reached his 200th career win on April 4 against Caltech in a doubleheader at Ben Hines Field. When asked about the Sara and Michael Abraham Campus Center behind Ben Hines Field he said “I love it!” and expressed minor regret over the planned relocation of the baseball field. / photo by Rafael Anguiano

Scott Winterburn is in his ninth season as the University of La Verne’s head baseball coach.

Winterburn has been successful in his nine years at ULV, making La Verne’s a premier division three baseball program.

The Leopards earned consecutive SCIAC conference titles in 2004 and 2005 and they earned the title again in 2008.

The Leopards also ranked in the national top 20.

They earned consecutive appearances to the NCAA Division III West Regionals under Winterburn.

Winterburn’s coaching road started in 1988 at Citrus College where he was an assistant baseball coach.

Due to a sabbatical leave of absence by Citrus College’s head coach, Winterburn got his first opportunity to be a head coach at the age of 24.

After two years at Citrus College, Winterburn decided to pursue his master’s degree at Azusa Pacific University where he coached baseball as well.

Winterburn coached at APU as an assistant for nine years, where he was able to contribute in every aspect as a baseball coach.

He coached infielders, outfielders, catchers, and specialized in coaching pitchers.

Winterburn was also in charge of recruiting and he coached the offense for a time as well.

In 2000, Winterburn’s tenth year at APU, he was given the opportunity to be the interim head coach of its team.

“I think I hit enough steps through my years of being an assistant that when I got my first head coaching opportunity at Azusa I was pretty ready to do that,” Winterburn said.

After a short interim position at APU, ULV offered him the head coaching position in 2001.

“I try not to keep track of things like that, my focus is what the team’s doing right now and I’ve tried to keep it like that over the years,” Winterburn said.

Through his successes with the baseball program, Winterburn has also managed to be a mentor to his players by taking his baseball philosophies and applying them to life.

“Our philosophy is constantly evolving, but I would say it’s generated around the principle of every person trying to give the team what it needs to be successful today,” Winterburn said.

Winterburn’s impact has been far reaching and he has given his present players motivation to develop and excel on the field, as well as off of the field.

“Burn has been a great mentor for the past four years. He has impacted my life not just in baseball, but in school and life in general, and has given me a lot of good advice,” said senior pitcher and movement and sports science major Sal Diaz.

As the assistant athletic director and the head baseball coach, Winterburn has a tremendous amount of responsibility.

Nonetheless, he manages to keep himself available for his players.

“Burn keeps an open relationship with us. He’s always there to help us on and off the field,” Tim Jolly, pitcher and junior business major said.

“I am proud to be a part of this program because he teaches more than baseball. He has shown us how to be men, and that makes this experience something special,” said Jolly.