By Cindy Harder, Michael Escañuelas on September 18, 2009 in News 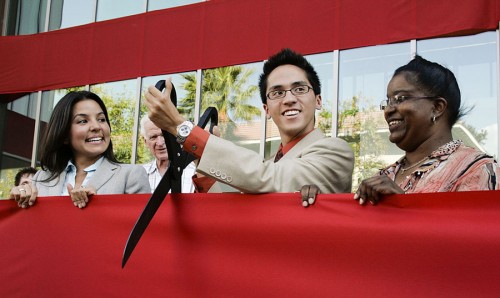 Alumnae Amanda Calzada and Tamara Collins join junior Christopher Kaelberer, Associated Student of the University of La Verne president, for the Campus Center Grand Opening on Sept. 10. Benjamin Harris, a member of the Board of Trustees, waits in the background for the first tours of the new building. / photo by Cindy Harder

The opening of the Campus Center marks the completion of years of planning. ULV’s Building on Excellence Campaign, the $26.1 million project was completed June 30 by K.A.R. Construction of Ontario and Gonzalez Goodale Architects. The building was open to students at the beginning of the fall semester.

“This building has brought the community together,” said Loretta Rahmani, dean of student affairs and host of the ceremony. “That’s what it symbolizes, community.”

President Stephen Morgan began the ceremony by summarizing the process that took place to complete the Campus Center.

The building was created with the goal of having a structure on campus for students to meet and relax. The 40,000 square-foot complex now acts as a lounge for students as well as an office building for some of ULV’s departments like the Academic Success Center, Office of Admissions and Student Affairs.

“There is a lot of buzz going around the building,” said Henry Fidler, a senior English major, who works as an admissions intern inside the Campus Center. “This new building marks a status symbol for the school.”

“This building is a home for students,” Kaelberer said. “They really deserve it.”

In association with ULV’s message of peace and diversity, the ceremony also included ULV campus minister, Deborah Roberts’ announcement of the relocation of the school’s peace pole, which was transferred from the University Mall to the west side of the Campus Center.

Her announcement included a display of the proclamation of peace in several different languages performed by ULV students.

Additionally, the Campus Center’s recent Leadership in Energy and Environmental Design silver certification was announced during the ceremony.

The Silver LEED certification, which is awarded by the U.S. Green Building for commemorating buildings that are environmentally efficient, marks the first building on the ULV campus to receive Silver status under the LEED system.

Throughout the program many of the people who contributed to the project of the Campus Center were thanked.

This included Sara and Michael Abraham, who gave the money to get the project started.
Other donors and many city officials were also acknowledged during the ceremony.

The program was concluded with the talent of singer Natalie Ganther, who is a ULV alumnus.

Following her performance, the program was finalized with the ritual ribbon cutting at the front of the building, which was followed by an explosion of confetti and music.

The three story complex was decorated for the occasion with large red bow.

Food and drinks were served on the top floor.