By Angie Marcos, Rafael Anguiano on October 9, 2009 in LV Life 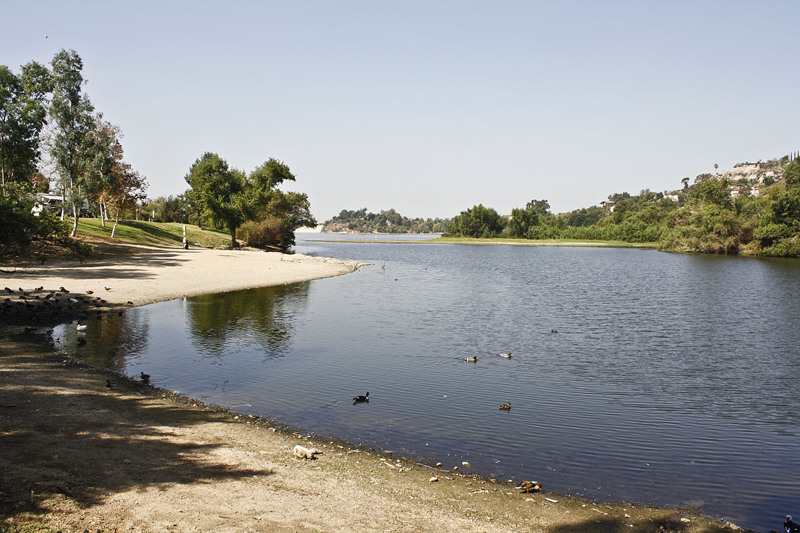 Puddingstone Reservoir is located in the heart of Frank G. Bonelli Regional Park in San Dimas. Construction of Puddingstone Dam began in 1925 and was completed in 1928 at a cost of $1 million. The park hosts boating, water skiing, concerts, parties, picnicking, camping, hiking, bird watching and bicycle riding. Admission is $10 before 5:30 p.m. and free after. / photo by Rafael Anguiano

“It’s an inexpensive way to spend time with the family,” Silvia Pena, a clerk at Bonelli Park, said.

Bonelli Park in San Dimas holds many attractions and recreational activities for local residents to gather and have fun.

“There are 30 year residents of San Dimas who don’t know this place exists,” Vincent Pedroza, cashier supervisor at Bonelli Park, said. “A lot of people don’t know about it.”

“It’s 2,000 acres of both developed and undeveloped land,” Pedroza said.

“The most popular time here is the weekend,” Pedroza said.

Jet skis, kayaks, canoes, pedal boats and fishing boats are easily attainable for rent at The Barge, a business located in Bonelli Park and also on Catalina Island.

Bait, single day fishing licenses and other supplies are also available at The Barge.

Horse rentals for horse back riding are available at the east entrance of the park.

“It’s pretty nice here, but I wish they had the swimming area open,” David Vargas, a Moreno Valley resident, said. “My favorite part of today was kayaking. I would definitely recommend kayaking at this lake.”

The most popular attraction at the park for visitors is the Swim Beach, a swimming area.

“Fishing is also very popular at the lake,” Pena said. “It just depends on what you like to do.”

An RV park, as well as 14 miles of trails, are located on the Bonelli Park premises. The trails are open to mountain bikers, hikers and horseback riders.

“I live in Pomona, so Puddingstone Lake is really close to me,” Robby Sue, a Pomona College student who goes fishing twice a week at Puddingstone Lake, said. “A lot of people go mountain biking, camping, running and kayaking here.”

“It’s really beautiful here,” Anthony Huacuja, a West Covina resident, said. “I think it’s a nice place to be. I played some baseball, football and went kayaking for the first time today.”

Bonelli Park holds various special events throughout the year. Triathlons, car club showings, ski races, jazz concerts, company picnics and a summer program for junior lifeguards are a few of the past events held at the park, Pena said.

Musicians who have performed at Bonelli Park include the Beach Boys, Little Richard and Ray Charles.
“It changes every year,” Pedroza said of the musical lineups.

The biggest and most popular event, the Family Music Festival, occurs annually in June.

Experience through internships
Sunday freshness at the Claremont farmers market