By Campus Times Editorial Board, Michael Escañuelas on October 23, 2009 in Editorials, Opinions 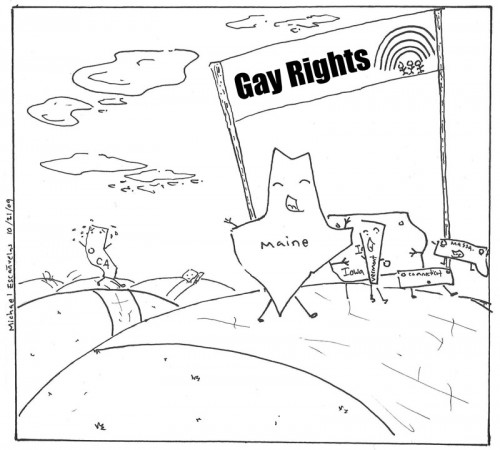 Could it be that California is nearing the acceptance of gay marriage? With polls showing a growing support for a repeal of Proposition 8, liberal ideals are expanding with support from our governor. On Oct. 11, Gov. Arnold Schwarzenegger signed two measures supporting the gay community.

The first created a statewide day of recognition for Harvey Milk, an openly gay politician and activist popularized in the 2008 film “Milk.”

Despite Schwarzenegger’s earlier veto of a similar bill, the buzz surrounding the film, as well as Obama’s recognition of Milk with the Presidential Medal of Freedom, has swayed the governor to finally recognize the slain activist’s attempts to expand civil rights to minorities.

To accompany Milk’s acknowledgment was the second bill signed by Schwarzenegger, which recognizes the legality of same-sex marriages granted to couples in other states.

Currently, four states have legalized same-sex marriage – Iowa, Massachusetts, Connecticut and Vermont. The marriages will become legal in New Hampshire beginning on Jan. 1. Citizens of Maine will vote on the issue in November.

Kudos to California, our idiosyncratic political culture is returning to the liberal standard it once held. Because this is the 21st century and society is advancing, it is only a matter of time before the acceptance of same-sex marriage spreads across the nation. There should no longer be any circumstance under which discrimination is permissible.
But more work needs to be done.

If history has taught us anything, it is that discrimination is long-lived. It should not be written into any state’s constitution. Instead, laws should be made to prevent discrimination, not support it.

With so many problems facing our nation, including a shaky economy and wars around the world, our legislative efforts should be directed toward them, not toward preventing loving couples from getting married. This issue should not be what divides our nation.

Those who oppose gay marriage say that it threatens the institution of marriage and family values. But how is it even possible for one couple’s relationship to have a concrete effect on another’s?

But excuses continue to be made, holding America back from the more important issues and allowing for discrimination against minorities.

The Full Faith and Credit Clause of Article IV, Section 1, of the U.S. Constitution requires every state to recognize “the public acts, records, and judicial proceedings” of every other state.

This includes marriages performed in those states as well.

Proposition 8 is a clear breach of this clause of the Constitution.

Despite right-wing arguments against gay marriage, we must accept the idea that California is a more
liberal state than others. California is the archetype of a blue state – we accept the lifestyles of many, and should progress to promote rights, not only to the gay community, but to all in society.

NBA athletic trainer talks business
A View to a Scare