By Rafael Anguiano, Xenia Martinez on October 16, 2009 in LV Life 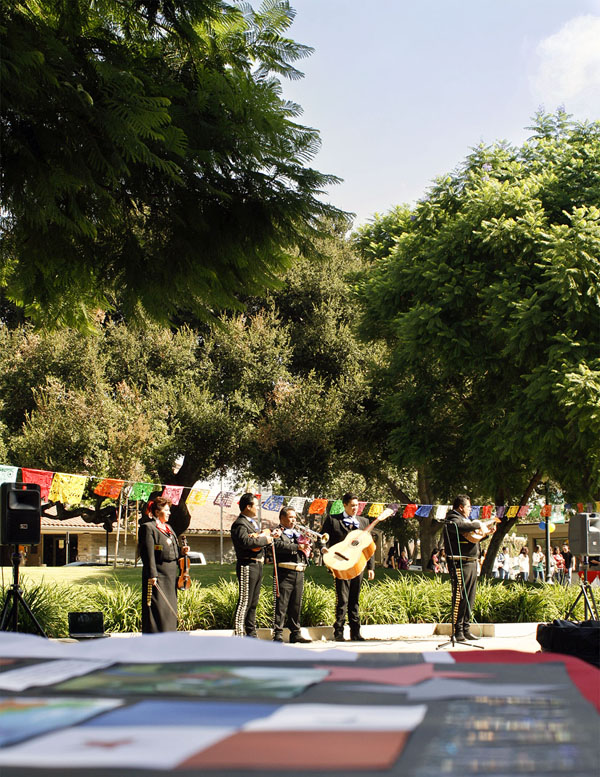 A live mariachi band and Mexican food set the tone for the Latino Heritage Week fiesta in Sneaky Park Oct. 8. The festivities featured booths with information about various Latin American countries. The event was sponsored by the Latino Student Forum. / photo by Rafael Anguiano

“It is a commemoration of Latino traditions and we wanted to bring cultural awareness to La Verne,” senior LSF President Lili Gradilla said.

The first day of this celebration was Samba Dancing Night, held in the Campus Center Ballroom. Professional dancers from the company Tropidanza Entertainment did 10 numbers and began instructing the crowd with mini-lessons to help create engagement.

“I was surprised of how many people showed up, both Hispanic and non-Hispanic,” junior LSF vice president Maritza Ramirez said.

The second day of the celebration was movie night, where they showed the movie “Walkout.” It is based on a true story of the 1968 East Los Angeles school walkouts.

“We wanted to show an educated movie about Latinos, and what better way than showing something that really happened less than 20 years before most of us were even born,” Ramirez said.

The next day was game night, which consisted of various games such as Loteria and pin the donkey, games well-known by the Latino community. Later in the night dances were taught such as the famous Caballlo Dorado and Payaso de Rodeo. These various dances are what you can call the Latino electric slide.

The biggest day of all, however, was the fourth day of Raices Latina Week.

The Latino Heritage Fiesta took place on in Sneaky Park.

Booths with flags and colorful cultural blankets filled the area with bright colors and showed the diversity in Hispanic cultures. Food, drinks and churros were given out to the first 50 commuters.

A mariachi band entertained people while they ate and interacted with one another. The ensemble encouraged requests from the audience and played songs for them.

“I like this environment, it’s a lot of fun,” sophmore international business major Roger Serrano said. “I’m from Mexico and I can definitely relate to the mariachi. It brings me back to my roots.”

The week of LSF’s festivities concluded with a Taco and Trivia Night to celebrate everything that had happened during the week.

A little of everything was incorporated into this day.

Participants practiced the different dances that had been taught, played games, ate food and brought the diversity of cultures together.

More than 150 tacos were provided by Candelaria, a restaurant located in Pomona.

“I think it is very important to share various cultures and embrace them,” President Stephen Morgan said.

“I encourage the community to mix, meet people and learn about all the different cultures here at our University,” he said.

“Latinos are still a minority. We want to be known,. We are just proud to be Latino and show the good things we do,” Ramirez said.

In October, LSF will volunteer at the Hollywood Forever Cemetery for its 10th anniversary. LSF will also be making an altar for Dia de los Muertos on Oct. 28.

Xenia Martinez can be reached at xenia.martinez@laverne.edu.