By Erin Maxwell, Michael Escañuelas on October 16, 2009 in News

Professor shows signs of optimism about changes in the world of online journalism. 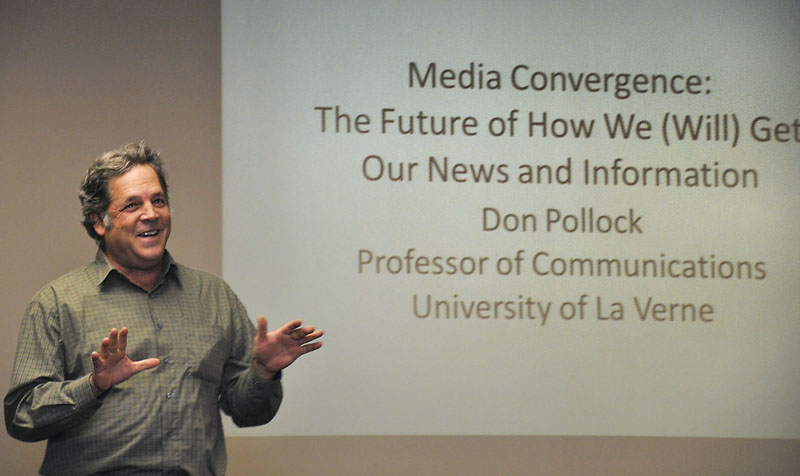 Don Pollock, professor of communications, spoke Monday afternoon in the President’s Dining Room about media convergence. He titled his lecture; “Media Convergence: The Future of How We (Will) Get our News and Information.” He spoke about the changes over time in journalism, media, music, and more specifically how the cost of TV access has changed since previous generations. / photo by Erin Maxwell

The future of media outlets and their advancing electronic roles took center stage with University of La Verne’s Don Pollock’s lecture, “Media Convergence: The Future of How We (Will) Get Our News and Information.”

The lecture, held Monday in the President’s Dining Room, outlined several arguments that involved the change in news, publishing and electronic outlets.

Pollock, professor of communications, focused heavily on the world of newspapers and journalists.

The main theme of the lecture was to emphasize the future of the convergence of these types of media outlets as we progress technologically.

“In some ways the future is frightening because it’s always changing,” Pollock said. “But there is also room for optimism with this change as well.”

Pollock began his presentation by saying, we’re all media experts.

A theme of his lecture was that media is a consistently changing world.

The point he illustrated addressed how this type of media converges with itself and how it affects our culture.

“A great theme of his lecture was how digital the news is becoming,” said Brittney Lokar, a senior education major. “That idea can have a widespread impact.”

Pollock’s lecture gave detail about media’s long history of change. Dating back to when the news was merely campfire stories all the way to the age of digital distribution we have today.

Pollock went down the list of changes the media has experienced with steps like using drawings to depict battlefields to photographs, or hearing a radio broadcast to actually seeing war coverage on the television.

He also addressed the issue of the crumbling newspaper industry and how it has been affected by recent technology.

With a heavy focus on the kind of journalism that is demanded in the current market, Pollock concentrated on several alternative methods that can be used to distribute news currently and looked at what worked and what did not.

“The demand now is for the multi-skilled journalist,” Pollock said. “You need to be an expert in everything.”

Pollock addressed that most professors are technologically fearful, and his concern with the job market for students gave insight into how professors should teach them.

Along with the journalistic side of Pollock’s lecture, the financial aspect of media was also articulated in the lecture.

Pollock focused heavily on the corporations that control several of the media outlets.

He explained the convergence history of many movie studios and news outlets, and cited several examples of how the media uses synergy to help promote their products and stay in business with the ever changing economy.

The business aspect of media plays a large role in how we obtain our news, Pollock explained in his lecture.

The free news outlets that we have today do not efficiently fund the reporters that write the articles.

“How do you make money from all this?” William Cook, a professor of English, questioned. “He made a big point of that. How do you maintain when the norm is breaking down?”

Another subject that Pollock addressed was the rise of social networking, blogging and expert sites sealing their place in the world of news.

Citing the example of how Twitter can make a movie bomb even before its opening weekend concludes, Pollock noted that these outlets could be the future of news.

“It makes me fearful about how people get their news,” Lokar said. “The increase of digital interaction decreases our amount of intimate relationships.”

Pollock’s stance on social networks and their future was also addressed in the questions section of the lecture, where the idea of rejecting technology was brought up.

The lecture spanned for little more than an hour and Pollock had to consistently drop topics for the sake of time.

Although most of his points were rich in detail, his time constrains did limit his chance to go more in-depth on his issues.

Regardless, Pollock was able to deliver his message to a packed audience.

Debate team continues success
Immigration to be front and center