By Michael Escañuelas, Stephanie Arellanes on October 9, 2009 in News 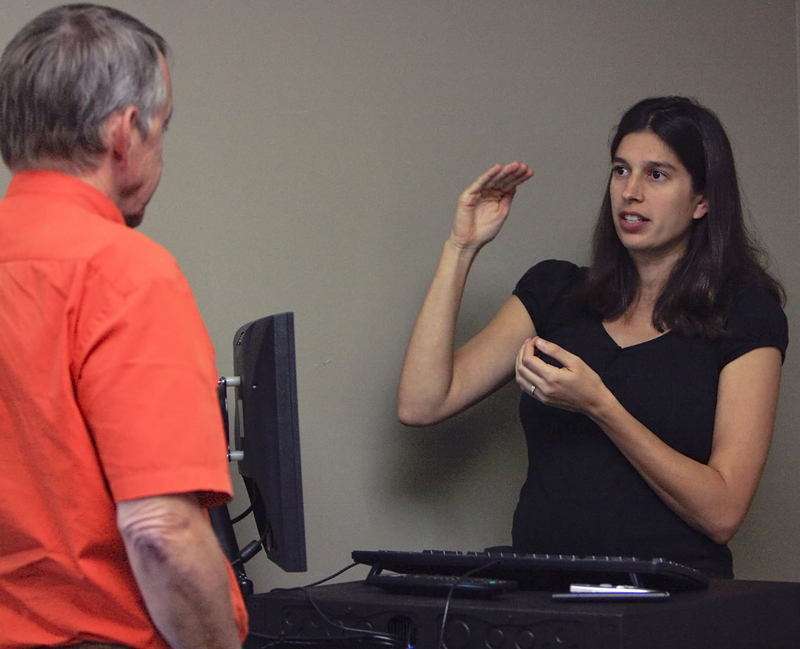 “Quantum Dots and Spintronics,” a lecture by Vanessa Preisler, assistant professor of physics, drew a small audience to the President’s Dining Room on Monday. Preisler outlined research she has done along with Cal State Los Angeles. The event, sponsored by the Faculty Research Committee and the La Verne Academy, was part of a regular series of faculty lectures. / photo by Stephanie Arellanes

Shedding light on a very complicated topic, Vanessa Preisler lectured about her research of quantum dots and spintronics on Monday in the President’s Dining Room.

As part of the Faculty Lecture series, Preisler, assistant professor of physics, lectured on her research for a little less than an hour, hoping to reach a wide audience.

“With my research it feels kind of isolated sometimes,” Preisler said. “This is a nice opportunity to share and interact with the university as a whole.”

The topic was divided into two separate divisions, quantum dots and spintronics.

Although both subjects were complicated, Preisler gave detailed explanation concerning their purpose and why they are important.

The lecture did not cover all aspects of the two areas; time constraints forced Preisler to prioritize her details, as she explained.

“Physics is out there on the forefront of knowledge in society,” David Werner, associate professor of English, said. “The world becomes more relative.”

In the first part of her lecture, Preisler explained that spintronics are spin based electronics that create a magnetic moment with their spin. By exploiting the spin flow of electrons, the user could manipulate the logic of Moor’s Law.

Explaining Moor’s Law, Preisler said that, “Eventually our current technology will get to a limit, with spintronics we hope to go beyond.”

Citing some of the history of spintronics including the discovery of giant magnetoresistance, or GMR, that was discovered by Albert Fert and Peter Grünberg in 1988 and was used in 1994. Preisler noted that for technology to be used so quickly after its discovery was impressive. The research that comes from spintronics will be used to make computers faster, Preisler said.

Her second subject was quantum dots, which are semiconductors. Their combinations of artificial atoms were the main discussion in the lecture. She noted some of the research she did in collaboration with Cal State Los Angeles which involved quantum dots, reaction to radiation. The radiation was done to complete research that would be applied if the technology was to be used in space.

“My challenge was to let the general public know what we’re doing with our research.” Preisler said.
Luckily the information that was presented gave the audience a good idea of the general topics that Preisler was covering. Preisler used a power point presentation with pictures, diagrams and definitions to help the audience understand the material.

When asked how she prepared a lecture Preisler said, “I avoided any math equations and tried to use analogies. Pictures help a lot without going too much into it.”

Although the topic was sometimes difficult to grasp without prior knowledge of the material, Preisler gave the audience a wide awry of information regarding her research.

“It was nice to be there and relate to the general public,” Preisler said.