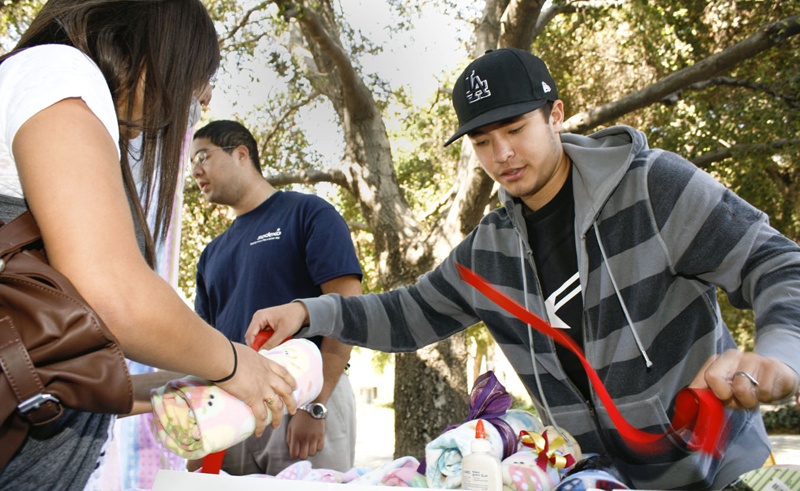 Michael Lin and Stephanie Hernandez, along with Jesur Habrek, make blankets for premature babies at the Children’s Hospital of Los Angeles. The event was organized by Sigma Alpha Epsilon and held in the Muriel Pollia Sculpture Garden on Monday and Wednesday. Most premature babies are born without sufficient body fat to adequately warm themselves and usually need to be incubated, but as they become able to warm themselves, blankets become useful. / photo by Rafael Anguiano

Premature babies at the Los Angeles Children’s Hospital will sleep warmer this winter thanks to a group of University of La Verne fraternity and sorority members.

The project “Mimis for Preemies” had the young men and women sewing blankets for premature babies at the children’s hospital.

“Mimis for Preemies” had a booth outside of the Campus Center on Monday and Wednesday where the blankets were made by members of the organization.

They also made cards to go along with the blankets made for the babies.

At the end of each day about 40 passers by had helped with the process, the coordinators said.

“We decided to pair up,” Sarah Sandoval, Phi Sigma Sigma’s philanthropy chairwoman, said. “We really liked the cause.”

“It sounded interesting and it’s something we haven’t done before,” Jennifer Juhasz, a junior, said.

It also displayed statistics that explained how common premature birth is and what people could do to help.

Premature birth occurs in 8 percent to 10 percent of all pregnancies in the United States.

The event was meant to last three days, but it was cancelled on Tuesday.

By the end of the project the ULV volunteers had about 30 blankets to take to the Children’s Hospital.