By Christopher Guzman, Michael Escañuelas on November 20, 2009 in News 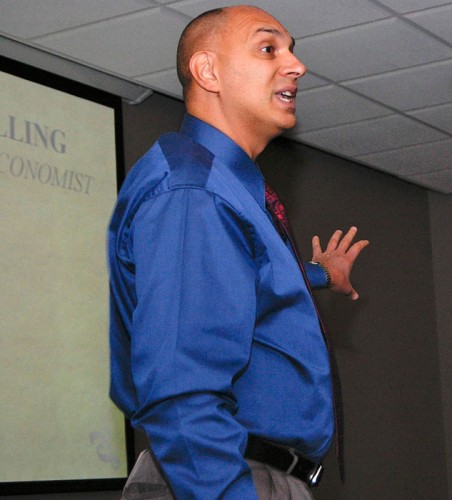 Omid Furutan, assistant professor of management, presented his lecture, “Immigration and Tolerance” in the President’s Dining Room on Tuesday as part of the Hot Spots lecture series. Furutan examined findings on illegal immigration from the economists’ point of view and discussed the effects migrant workers have on an economy such as the United States. / photo by Christopher Guzman

Omid Furutan sparked long debate and discussion with his lecture on immigration on Tuesday in the President’s Dining Room as part of the Hot Spots lecture series.

Furutan’s lecture, appropriately titled, “Immigration and Tolerance,” focused on the topic of global segregation and the borders that are not only in California, but in the entire world.

Furutan, who is an assistant professor of management, held a similar lecture earlier in the semester concerning similar ideas of immigration and the economy.

His most recent lecture focused on not only the topic of the economy, but also how global segregation cripples our worldly progression through the economy and the job market.

“I knew that I would have more students in the lecture,” Furutan said. “I wanted to present something that would create an argument.”

Furutan’s lecture began with some background information regarding the current status in labor migration and national borders.

“I agree with what he’s saying,” said freshman Victoria Moreno.

“Global desegregation would be our ultimate goal, but it is far ahead of our lifetime,” she added.

After introducing the topic and giving a few examples, Furutan moved to the subject of American immigration and its affects on our country.

Furutan gave statistics citing that 3 percent to 6 percent percent of the population are illegal immigrants.

He posed the question of what does America do with this issue of immigration?

His response, which garnered some laughter from the audience, was that we build a wall.

He stated that immigration barriers interfere with the free labor movement and that immigrants typically make nine times more money in America then they would in their home country.

Many of these issues Furutan pointed out, he argued, would be solved with the dismemberment of the walls and immigration barriers.

He argued that with global desegregation, wages in different countries would eventually level out and become equal.

“If we look at a different country as an example, the fears that surround this idea never occurred,” Furutan said. “As a whole the net effect will actually increase.”

In addition to the points made concerning the job force and wages, Furutan also brought up the issue of culture in America.

He presented the counterargument that immigration destroys culture.

Furutan argued that some cultures – including the Jewish, Mormon and Mexican communities – remain intact and still active in America.

“You don’t see much of this tradition in Cali­fornia,” Furutan said. “But you do still see a very distinctive Mexican culture.”

The topic of culture was the center focus during the questioning session following the lecture.

Furutan concluded his lecture with a slide depicting segregation in America through the last century.

Furutan noted that he would not speak during the slide show, saying that the pictures speak for themselves.

The photos depicted major historical events like school desegregation, the first African-American senator and president. All photos which have shaped America’s cultural growth.

The final slide included in Furutan’s lecture was a quote that said, “The Earth is but one country and mankind its citizens.”

The quote brought life to the presentation, wrapping together all of the conjured ideas and facts earlier presented.

“I really think that quote captures the total spirit of the presentation,” Furutan said.