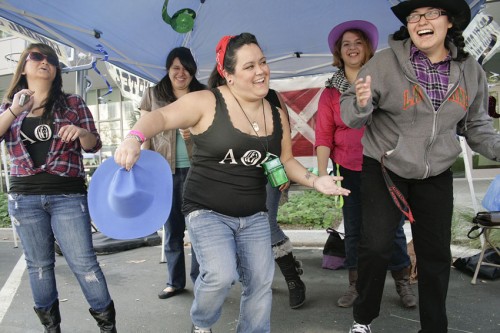 Students, parents, staff and University of La Verne alumni came together on Saturday to celebrate Homecoming at the Homecoming Street Fair.

Samantha Cacchione was announced as 2009 Homecoming queen Saturday during halftime of the football game. A senior, Cacchione is a member of Phi Sigma Sigma and the ULV dance team, and is a political science major. / photo by Rafael Anguiano

Those who attended the awaited weekend played games, won prizes, enjoyed candy and cupcakes, and learned about the different organizations offered on campus.

Each of the booths had a theme from a different show from TV Land, the theme for the entire Homecoming Week.

The best booth won $150 for their organization. The winner, Psi Chi, the psychology honors society, had a booth themed around “I Love Lucy.”

Michelle Alfaro, Psi Chi president, said they were thrilled and excited about the prize.

Psi Chi organized a game inspired by the “Chocolate Factory” episode of “I Love Lucy.”

In the show Lucy uses a conveyor belt to get chocolates ready but can not keep up with the conveyor.

In the game at the booth, the idea was to wrap as many chocolates in paper with only a small amount of time.

They also gave out raffle tickets to those who could answer all the trivia questions about the show.

The College Panhellenic Association held mock weddings at their booth, which was themed after “The Honeymooners.”

Caitlin Lim, who helped organize the CPA booth said they had everything for the wedding including rings, certificates, a veil for the bride and they even came up with vows that related to Homecoming.

The vows themselves stated that such marriage was only valid until the next day.

Homecoming King Ryan Figgs, defensive back for the football team, was crowned during halftime of Saturday’s game. Figgs, a business administration major, is the activities coordinator of publicity for the African American Student Alliance. / photo by Rafael Anguiano

“I enjoyed getting married at the ‘Honeymooners’ booth,” junior Marcella Marquez said.

LeoFM provided a lively mood for the event by having interviewing members of the organizations that had booths and playing music.

The booths all seemed to have creative games to be played.

“Our theme was ‘Cheers’ so we wanted to incorporate bar games, so we had root beer chugging races,” Alberto Castillo, a junior member of the Rainbow Alliance, said. “No one got past the second cup.”

Some of the other themes included “Star Trek,” “Batman,” “The Fresh Prince of Bel-Air,” “Bonanza,” “The Brady Bunch,” “Bewitched,” “Saved by the Bell,” “The Addams Family” and even the Mexican classic comedy show “El Chavo del Ocho.”

The fair also included a classic car show in the parking lot between the new Campus Center and the Hanawalt House as well as a performance from the dance team.

The alumni lunch was outside of Miller Hall at the same time as the fair. These two events were followed by the football game and the crowning of seniors Samantha Cacchione and Ryan Figgs as Homecoming queen and king.

Hosted by the athletic training education program, the 5k Community Fun Run started at Third and C streets at 8 a.m. Saturday. Alumni, students, and faculty participated in the event to kick off the Saturday’s festivities. Armando Luna won the run in about 30 minutes. / photo by Cindy Harder 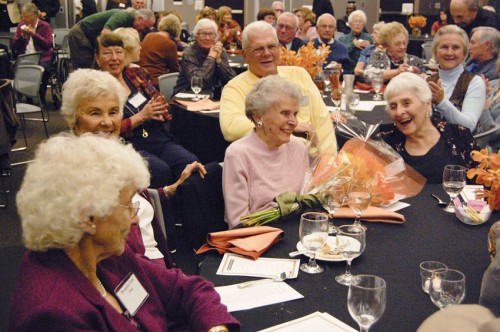 Hundreds of University of La Verne alumni reunited in the Campus Center ballroom Friday night for the annual alumni dinner. Most of the former students came to celebrate a ‘decade’ reunion, with classes as recent as 1999 present. Ruth Morgan, mother of President Steve Morgan, was honored as a representative of the class of 1936. Among her tablemates were Margaret Zook, Mildred Davis and Lena Coffman. / photo by Christopher Guzman 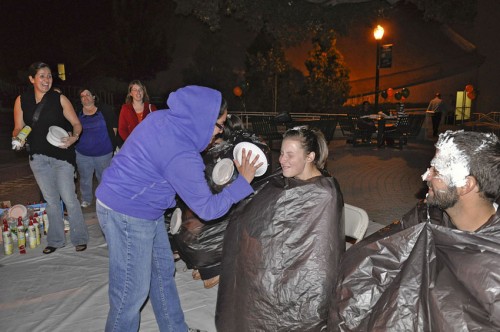 Everyone who attended the pep rally Friday evening was given the opportunity to throw a whipped cream pie at members of the Homecoming Court. Senior Nataly Escobar gave senior Samantha Cacchione, who was eventually elected Homecoming queen, her first cream pie of the night. / photo by Erin Maxwell

Correction
In a photo caption in the Nov. 13 edition of the Campus Times, Homecoming King Ryan Figgs was incorrectly identified as the activities coordinator of publicity for the African American Student Alliance. He is currently president of the Brother’s Forum. The Campus Times regrets the error.