By Cindy Harder, Julissa Cardenas on November 20, 2009 in LV Life 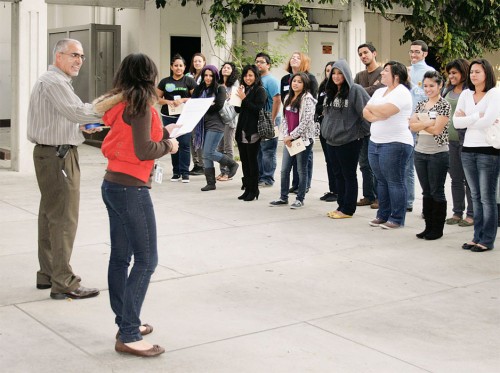 Daniel Loera, multicultural affairs director, lead the Latina/Latino Retreat on Nov. 13 in the Howell Board Room and Sneaky Park. Loera and Lili Gradilla held activities for the Latino students from the University of La Verne and Azusa Pacific University. Students shared their life experiences and compared the differences between the universities. / photo by Cindy Harder

Immigration, gender roles, tradition and Latino heritage were only a few of the topics discussed at the Latino Retreat on Nov. 13.

The Latino Student Forum held the annual event in the Howell Board Room and Sneaky Park.
Daniel Loera, multicultural affairs director, faculty members and students from LSF hosted the event.

“We are here today to discuss what it means to be Latino, and also share about our experiences in school, at home, or any particular thing you want to share,” Loera said.

Along with ULV students, students visiting from Azusa Pacific University attended the event.

Those students are part of their own club at APU, but believe that their needs are not being met.

In order to feel as if they were a part of a heritage group, they decided to visit the Latino Retreat at ULV.

“I hope that our friends at APU enjoy this retreat, and find some answers they seek,” Loera said.

After the students filled out the “Quienes Somos Chart/ Who We Are Chart,” they all went around the room and introduced themselves.

After being asked a series of questions on personality, communication skills and family, they broke out into groups to discuss their answers.

Jennifer Perez, a senior international business major, was there to discuss the topics.

“I consider myself Latina or Mexican, not Hispanic, because of the word and its connotations,” Perez said.

“I also feel that as a Latina woman I have come far, and have done really well for myself,” she said.

Along with students, faculty members were also there to discuss and learn about the Latino heritage.

Men’s soccer coach Crescencio Gonzalez, who is also part of LSF, feels the need for Latinos to get involved on campus.

“La Verne is made up of a big number of Latinos and only about 10 percent are here today,” he said.

“It makes me question ourselves and what can we do to increase the number of Latino students involved,” Gonzalez said.

“At least half of my soccer team is made up of Latino students, and they should all be here today. Also, some of them work, so it makes me wonder what a Latino student has to do in order to pay and stay enrolled in school,” Gonzalez said.

As the event went on, many students discussed their feelings about growing up Latino or Latina and expressed concern for the immigration issues in this country as well as their success now, and the future success for those who follow.

“I hope next year brings many new and returning students. We need to spread the word and get students involved,” Gonzalez said.

“This would have been a great thing to have for people who grew up in my generation and I only hope this continues on,” he said.