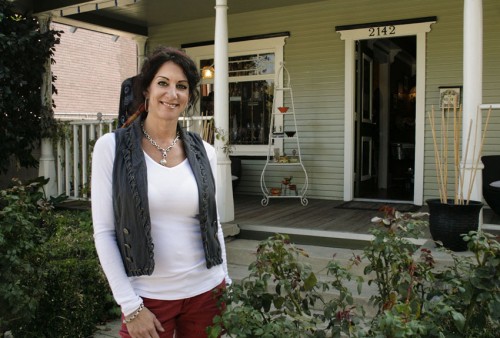 Helping to bring awareness to the National Breast Cancer Awareness Month, Boni Wish held a fundraiser Oct. 22 called “Bold, Bodacious and Totally Outrageous” at her store Wishes Boutique, located at 2142 Third St. in downtown La Verne. Other downtown La Verne businesses participating in the event were Serendipity, Generations Antiques and Le Coiffure. Wish moved to La Verne from Ohio three years ago, and has owned her store for a year. / photo by Cindy Harder

In recognition of October as Breast Cancer Awareness Month, local La Verne businesses held a fundraiser in effort to raise money for the Susan G. Komen for the Cure Foundation.

Boni Wish, owner of Wishes Boutique in La Verne, set up the fundraiser and proposed to surrounding businesses in downtown La Verne to take part in it.

All were encouraged to help with the fundraiser however best fit their business.

“I always give back,” Wish said. “I thought since it was Breast Cancer Awareness Month, it would be a good fundraiser to do.

“I went to pass out fliers to some of the businesses nearby,” she said.

Wishes Boutique was able to raise $500 for the foundation.

Wish hosted a fall collection debut, titled “Bold, Bodacious and Totally Outrageous” at her boutique to draw in as many costumers as possible to take part in the fundraiser.

Activities during the event included a fashion show, along with food and wine.

“As an owner of a woman’s boutique, you feel good helping out a good cause for women,” Wish said. “We could never raise enough money to help find a cure. Every dollar helps.”

Directly next door to Wishes Boutique, Serendipity, a beauty spa boutique for hands, face and feet, also participated in the fundraiser.

The spa welcomed those who came in that day with desserts and offered $15 foot soaks.

Customers who donated to the fundraiser were shown appreciation with goodie bags holding over $20 worth of spa materials to use at home.

“Anyone who donated $10 or more we gave them a bag of goodies,” Belinda Stotts, an employer at Serendipity, said. “The bags had aroma beads, a candle, lotion and a loofa scrub.”

“It was fun. We had people who heard about the fundraiser come stop by the shop and our regular clients really enjoyed it,” Stotts said. “It was very rewarding.”

Le Coiffure Salon gave 10 percent off to all of their clients who came in to support the breast cancer fundraiser.

Generations Antiques also had a special for their customers and 20 percent of the sales went to the Komen Foundation.

The Local Deli donated more than $100 to the foundation.

“I enjoy giving back to the community,” Orlando Vengco, owner of The Local Deli, said.

“My wife has family members who have dealt with breast cancer and I have a family member who had cancer as well,” Vengco said. “I know people at the City of Hope Hospital too.”

As stated by the National Cancer Institute this year there are nearly 193,280 new reported cases of both men and women diagnosed with breast cancer in the United States.

There were also an estimated 40,610 deaths of both men and women from breast cancer this year.

Susan G. Komen for the Cure Foundation has been working since 1982 to help fund research for breast cancer, making it the largest nonprofit fundraiser in the world to fight against breast cancer.

Donations to Susan G. Komen for the Cure can be made at the foundation’s Web site, www.komen.org.

Aisha Gonzales can be reached at aisha.gonzales@laverne.edu.