By Kevin Garrity, Stephanie Arellanes on December 4, 2009 in Volleyball 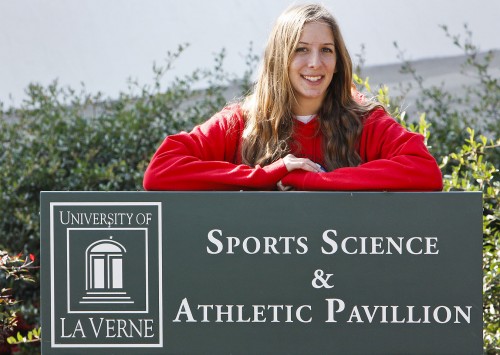 Crista Jones, a senior middle blocker and outside hitter for La Verne, concluded her last season as a Leopard. Jones, a movement and sports science major, is a two-time All American and unanimous SCIAC Player of the Year. / photo by Stephanie Arellanes

In today’s sports world it is refreshing to come across an athlete who has earned numerous individual accolades, all the while thanking her teammates whenever given the opportunity.

Fortunately for La Verne, senior Crista Jones has exemplified that type of person on and off the volleyball court.

A Saturday night in mid-November marked the end of Jones’ playing career in a five set regional championship match, but her time at La Verne will live on in the record books.

“She is an amazing person on and off the court,” said fellow senior Ashley Morgado. “She has a great spirit about her and she made playing at La Verne a great experience.”

“She is not only a unique athlete, she is a unique person,” head coach Marlon Sano said. “We asked her to take on the role of a leader on this team and she didn’t blink an eye.”

Jones was named to the American Volleyball Coaches Association First Team All-American Team for the second consecutive year, to go along with her Southern California Intercollegiate Athletic Confer­ence Player of the Year award. And yet she will only speak about it for a couple of seconds before giving her teammates the recognition they deserve.

“Without my teammates I wouldn’t have been able to experience all the great moments over the past four years,” Jones said. “We are like a family. You practice with the girls and eat with the girls everyday and without them I couldn’t have gotten through all the hard work that is demanded of us.”

Jones was raised in Fresno and went to Sunnyside High School. There she played varsity volleyball all four years. Once out of college she was contemplating going to either Fresno State or La Verne. She chose La Verne to experience a new city and wanted to be close with her sisters, both La Verne alumnae.

She will complete her movement and sports science degree with a teaching emphasis this spring and hopes to go into teaching and coaching.

“We came in together as freshmen and I remember noticing how quiet she was that year,” Morgado said. “I didn’t think she was going to fit in with some of the big personalities we had on the team, but once she got on the court she was able to hold her own.”

Jones led the team to the NCAA finals last year, only to fall to Emory University.

“Some of the best memories are just traveling with the girls,” Jones said. “And going to the nationals last year was on of the greatest experiences I have ever had.”

In the 2009 campaign, she tallied 602 kills, 347 digs and became the La Verne all-time kill leader, all while moving from middle blocker to outside hitter.

“We asked her to go from being an All-American athlete at one position and asked if she could learn a new skill set and a completely different position, and she stepped up to the challenge,” Sano said. “Teams game planned around her and yet she was still able to this successful.”

“It has been an extremely fulfilling time at La Verne,” Jones said. “I have met a lot of great people and will be able to cherish a lot of memories I was able to make here.”