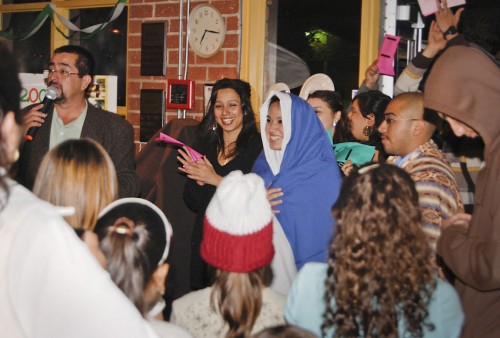 Guests enjoyed Mariachi music and pozole, a traditional Mexican soup, as the Latino Student Forum celebrated Las Posadas in Davenport Dining Hall on Friday. Adviser Crescencio Gonzalez and President Rosalilia Gradilla hosted Los Posadas as a celebration of the trials of Mary and Joseph before the birth of Jesus. Andrea Sotosainz and Danny Perez played the Virgin Mary and Joseph as they joined guests in singing traditional songs for Los Posadas. / photo by Christopher Guzman

The Latino Student Forum hosted its 13th annual Las Posadas event to a large crowd of students and La Verne community members on Friday in Davenport.

Las Posadas, an annual dominantly Latino tradition, recognizes the journey of Joseph and Mary before they found a place to stay and give birth to Jesus. The holiday is a nine-day celebration that begins Dec. 16.

The Latino Student Forum has made the holiday an annual tradition at the University of La Verne with a celebration of music, activities and games for the entire La Verne community.

“It’s a fun festive event that caters to our community,” Rosalilia Gradilla, LSF president, said. “The community is our No. 1 target.”

The event, which began years ago as a small gathering that involved a piñata, has now grown into a large gathering that filled Davenport with both students and families. Food including menudo, bread, pozole and drinks like hot chocolate and fruit punch were served while a mariachi band played for guests throughout the night.

The West Wing of Davenport housed a children’s activities area that included arts and crafts and loteria.

“Every year it keeps getting bigger and bigger,” Gradilla said.

The event began at 6 p.m. and lasted until 9 p.m. Guests were let in and welcomed to listen to the music and eat snacks. The ritual celebration of singing was done in the north doorway of Davenport.

During the caroling, two students were reenacting the journey of Joseph and Mary in tradition of Las Posadas. After the singing and reenactment everyone gathered outside where three piñatas were set up for children.

“Our students do a great job at being hosts and hostesses,” said Steve Morgan, University of La Verne president. “It’s always important to be involved with the community.”

Outside of Davenport a large group of children and their parents and even a couple students gathered around and destroyed three piñatas filled with Mexican candy.

After the outside festivities were completed the group headed back inside for the final event of the night, the distribution of donated gifts to children.

Leftover gifts were donated to charity.

“I’m very proud of this event and the Latino Student Forum,” said Christopher Kaelberer, president of the Associated Students of the University of La Verne. “It’s one of their long standing traditions.”