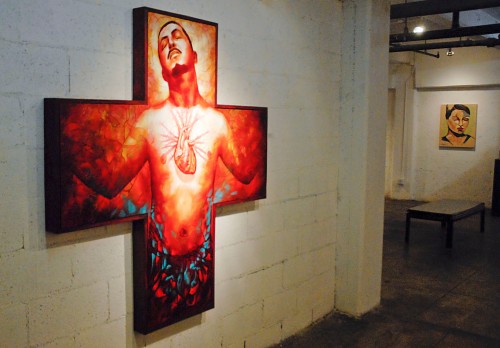 An exhibition titled “Collector’s Choice,” is now on display at the Latino Art Museum on Second Street in Pomona. Armando Durón, a Los Angeles area art collector, selected many works, including paintings by Luis Soto, left, and Yolanda Gonzalez, right. For the exhibition, Durón challenged the artists with loosely based rules and themes to bring out works from within their professional communities. Many of the artists may have been precluded due to struggles with cultural, economic or time issues. / photo by Nicholas Mitzenmacher

Collectors of art are often asked to curate an art exhibit due to its basic nature, according to lamoa.net, the museum’s Web site.

However, Durón is held in high esteem in the Chicano art world due to his valued opinion and his knowledge of the culture.

His high standing in the art community was the key element that allowed for his exploration in the rules surrounding selecting art the his exhibit.

In “Collector’s Choice,” Durón had neither theme in mind nor the formal requirements that were desired from the artists chosen.

He wanted the artists to find the parts of their minds and emotions they had not used lately due to outward pressures.

The president and founder of the LAM, Graciela Nardi asked Durón to display his collection for the month.

“This exhibition was previously in Los Angeles for the beginning of January, and we were privileged to receive it here,” Nardi said.

The exhibit started off slow with a few guests trickling in, but then many interested visitors flowed in to view Durón’s choices.

For all guests, there were hors d’oeuvres and water, with readily available volunteers to answer any guest’s questions.

“I came to the exhibit to see what makes an artist and the different styles used by different people,” Maria Gonzalez, a guest at the reception, said.

“Art shows the feelings of the artist at that time in their life,” she added.

Gonzalez said the piece that caught her eye immediately was the realism artwork in the entrance to the exhibit entitled, “Mi Corazon,” by Juan Solis.

The art depicts a Latin man with his heart exposed and arms extended, all within the shaping of a cross.

“To me, the piece depicted a man’s feelings of faith and acceptance,” Gonzalez said.

She said most of the pieces she preferred seemed to express feelings of pain and anxiety.

David Pion-Berlin, secretary of the LAM board, was in attendance to the evening’s festivities.

“The exhibit shows typical Chicano art, but without a specific style that can categorize them all,” Pion-Berlin said.

Pion-Berlin has studied under artists who specialize in realism, which is why he prefers such art, he said.

Pion-Berlin said he was drawn more to the realism pieces.

“I appreciate the reality, especially in the depiction of a face,” Pion-Berlin said.

The art walk exhibit consisted of pieces chosen by Durón himself created by such Chicano artists as Ramon Ramirez, Patssi Valdez and Victor Durazo.

Ranging from realism to abstract to just pure expression, each artist’s work articulated their feelings through the color palettes and techniques used to create the pieces.

The exhibit was on display for a month from Jan. 13 to Feb. 17 at the Latin Art Museum in Pomona.

For more information about upcoming events at LAM, visit lamoa.net.