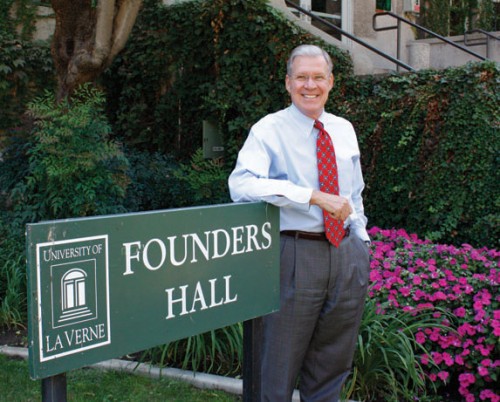 University President Steve Morgan stands in front of Founders Hall in this file photo from September 2008. Founders auditorium will be renamed the Ann and Steve Morgan Auditorium, after the president and his wife. Morgan announced his retirement, effective Spring 2011, from the University of La Verne on Thursday after serving as president for 25 years. / file photo by Stephanie Arellanes

“It’s been in the planning for a long time. I feel it’s an appropriate time to step aside,” Morgan said.

During Morgan’s quarter century as president, he has helped to acquire the University land south of Second Street and east of D Street.

This includes Leo Hall, the Arts and Communications Building, and the Oaks residence halls, to name a few.

“Steve Morgan is one of the greatest presidents the University of La Verne has ever had,” said Al Clark, associate vice president of academic affairs. “I am sad he is leaving, but glad he has led us for so long.”

According to the announcement sent by e-mail on Thursday, the Board of Trustees for the University will establish a Presidential Search Advisory Committee to find a new president, consisting of one representative from each of ULV’s colleges.

After this committee decides on a job description and required qualifications, nominations will be accepted from the La Verne community, other educational institutions, and the public at large.

Jonathan Reed, Interim Dean of the College of Arts and Sciences, was surprised when he heard the news.

“I am thankful to Steve Morgan for putting the University on a stable foundation for excellence in the 21st Century,” Reed said. “I hope the new president will have a focus on academic quality and a commitment to diversity.”

“We both have such a love for La Verne. The next president will have some hard shoes to fill, but I am looking forward to the next big adventure,” said Diana Towles, executive secretary to the president, who has been working with Morgan for over 16 years.

“His belief about access to all students influenced me to come to the University of La Verne,” said Mark Goor, dean of the LaFetra College of Education. “I feel sadness that he is leaving, but he really deserves a rest.”

“I wasn’t entirely surprised. Steve’s love for and contributions to this institution have been enormous over the past 25 years,” Hector Delgado, professor of sociology said.

Morgan hopes that the University of La Verne is stronger now than when he came in as president in 1985.

“I hope the new president has a fresh perspective and clear vision of what La Verne could become in the future,” Morgan said. “I hope it continues to strengthen and better serve each new generation of students.”