By Kristen Campbell, Rafael Anguiano on March 5, 2010 in News 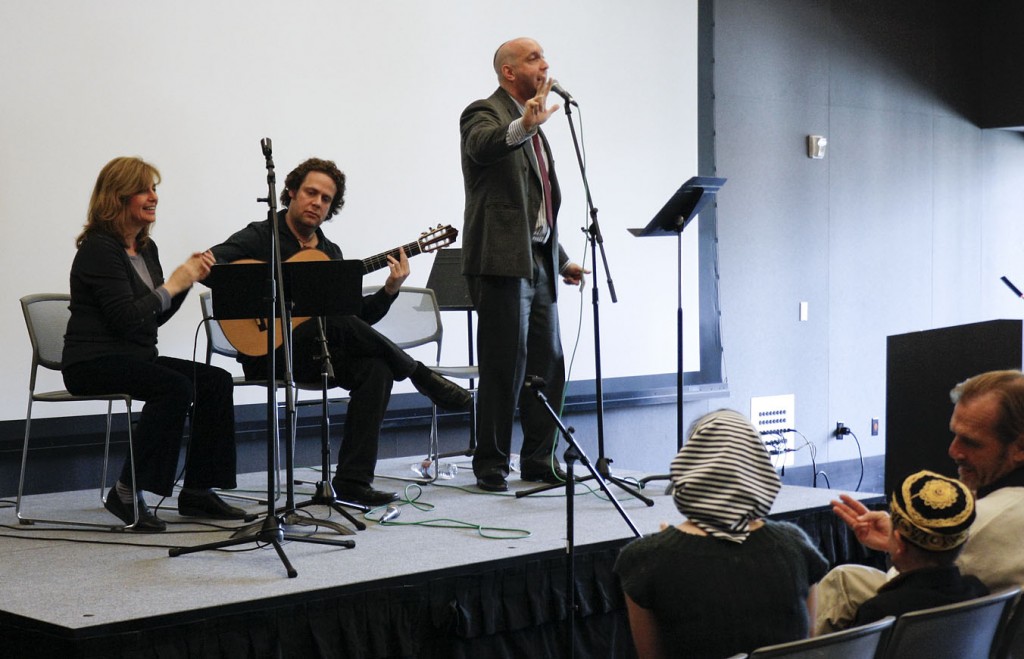 Noreen Green, director of the Los Angeles Jewish Symphony; Cantor Marcelo Gindlin of the Malibu Jewish Center and Synagogue; and Adam Del Monte, jazz guitarist and adjunct professor at USC, perform “Musical Traditions of the Sephardic Jewish Community” on Wednesday. Professor of Music Reed Gratz and his son, Joachim, sing along in the audience. / photo by Rafael Anguiano

The Ludwick Conference Center Ballroom A buzzed with talk of music and culture on Wednesday at the presentation of “Musical Traditions of the Sephardic Jewish Community.” The room was nearly full of students, faculty, and Jewish community members.

This event was made possible by a grant from the Rhoda and Israel Kachuk Jewish Studies Fund; the donors were among the attendees.

The event began with introductions of each of the musicians and the explanation of the history of Sephardic music, as well as Ladino, the language used in the songs’ lyrics.

“Spanish is similar to Ladino,” said Marcelo Gindlin, the cantor. “It is spoken among many Jews in Spain and is a dialect from old Castilian Spanish.”

Gindlin said he embraces all types of music, sometimes incorporating the Sephardic twists into his performances. Born in Argentina, he was exposed at a young age to the music due to the large amount of immigration of Jews into the country.

“The music is passionate and dramatic. It nearly always includes the word ‘corazon’ to show the love behind the words,” Gindlin said. “But, what is life without drama? Isn’t that why soap operas are so popular?”

Gindlin sang “Ocho Candeliquas,” with audience participation, to jazz accompaniment by Adam Del Monte, and under the direction of Noreen Green, director of the Los Angeles Jewish Symphony.

“I am an expert in flamenco and classical styles of guitar,” said Adam Del Monte, jazz guitarist.

Del Monte lived in Malaga, Spain from ages 2 to 4, so upon his exposure to flamenco, he said he fell in love with the style, and desired to become a professional.

“I was raised as an Ashkenazi Jew, but after discovering I wanted to pursue music, I explored the Sephardic culture,” Green said. “I created the Los Angeles Jewish Symphony in 1994 with musicians from all backgrounds.”

She said Sephardic Jews originate from the Iberian Peninsula and their liturgy has foundations taken from Spain and Portugal.

Throughout history, the Sephardic Jewish culture has received little recognition by scholars.

The Sephardic Jews resided in Spain for nearly 1,000 years and in 1492 either became “converses” or left to countries such as Greece, Turkey, Israel, and other Arabic countries.

Sephardic Jews have a strong desire to preserve the language, the culture, and the music, which can be compared to traditional flamenco styles.

“I attended the performance for my guitar workshop class,” said Jesse Evans, junior public relations major. “I was excited to learn about and hear the guitar styles they presented.”

“I love the sound of Sephardic music and I wanted to know more about it,” said Marjorie Ludwig, choir director at Temple Beth Israel in Pomona. “After attending, I felt as if I was an expert of the culture.”

After Gindlin, Green, and Del Monte concluded their final piece, the audience’s applause and chants for an encore encouraged them to perform one more song, a beautiful lullaby that brought some listeners to tears.

If anyone is interested in seeing the Los Angeles Jewish Symphony directed by Noreen Green, they are performing at 7:30 p.m. on Thursday, March 11 in the Royce Hall Auditorium at UCLA. Tickets are available online.