By Michael Escañuelas, Nicholas Mitzenmacher on April 30, 2010 in News 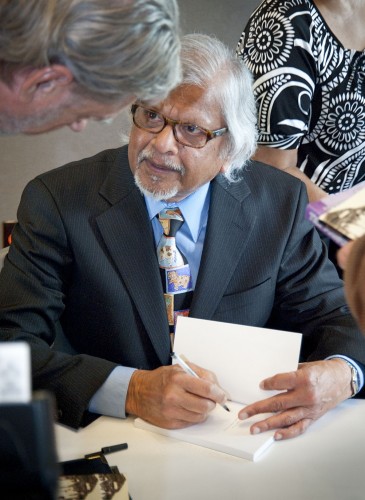 After his speech, Arun Gandhi signs books for audience members, including Kent Badger, professor of health services management. Gandhi, the grandson of Mohandas Gandhi, spoke on “Nonviolent Responses to Terrorism” at the Benazir Bhutto and Ahmed Ispahani Lectureship event in the Campus Center Ballroom. Every seat in the room was taken. / photo by Nicholas Mitzenmacher

The message of peace and nonviolent response was brought to a full house at the University of La Verne on Friday with a lecture by Arun Gandhi.

The talk centered on topics of the American culture of violence and how to apply the message communicated by his grandfather of nonviolent protest.

The event was held in the Campus Center Ballroom with more than 200 people filling all the chairs in the room and flooding the back of the room and the hallways with people.

“The topic of discussion opens up the mind,” said Ahmed Ispahani, professor of business administration and economics and one of the organizers of the lecture.

After a brief welcome by President Stephen Morgan and Paul Moseley, a trustee who, along with Jeanne Moseley, helped establish the event, Kenneth Marcus gave an introduction to Gandhi along with some background.

“It’s great to get a high profile speaker on campus,” Moseley said. “I thought his message was great.”

Gandhi began his lecture by saying that his grandfather was not a perfect man. He explained that no one is perfect and used this statement as a means to understand people’s mistakes.

After establishing this idea Gandhi then defined the two terms that would be the focus behind most of his lecture, nonviolence and terrorism.

“It’s definitely something different from what we are typically taught,” Ben Jenkins, junior history major.

Gandhi’s lecture touched on many of the aspects of American culture that contribute to a violent mentality. Some of these topics included the idea of terrorism after 9/11, the division of bad and good in people and the current war in the Middle East.

Many of the ideas and practices were adopted not just from his great grandfather’s methods but also his parents and his grandparents as well.

Gandhi explained many methods of how his family handled discipline and raising children.

Some of these methods involved the punishment of the parent rather than the child.

He used these methods and compared them to more violent methods of discipline commonly seen in American households.

“I’m impressed that he still can carry the message of nonviolence,” Morgan said. “He brings encouragement. I hope he gets people mobilized.”

The event sparked many questions following the lecture.

Several questions were taken from the audience members including faculty and students.

Some of these questions had to do with how to keep a nonviolent mentality in a violent culture and questions as to why we have such violent methods embedded into our culture.

“It was beyond a privilege to see Dr. Gandhi speak,” said Michael Quesada, a senior history major. “He speaks lessons that are not taught enough.”

Following the lecture was a signing of Gandhi’s book dealing with peace and nonviolent practices.

Gandhi’s lecture sparked great conversations among many of the audience members following the event.

When asked why he chose La Verne as a place to bring his message of peace, Gandhi said that he always goes where he is invited and stressed the point that college students are the leaders of tomorrow.