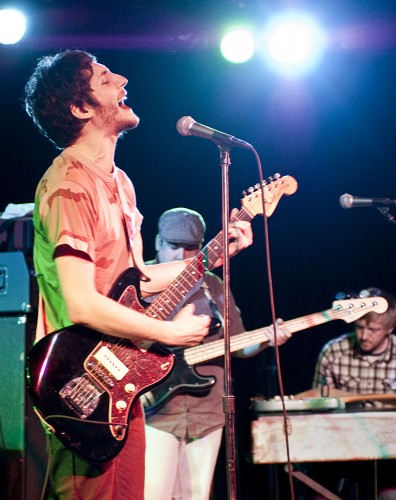 Opening up for Copeland, Person L kept the crowd moving at the Glass House in Pomona on March 5. Lead vocalist Kenny Vasoli, formerly of The Starting Line, released Person L’s first album through his own record label, Human Interest. / photo by Christopher Guzman

Not many people in the music business can turn heads like Kenny Vasoli.

Formed in 2006 in Pennsylvania as a method of exploring different genres, the full realization of Person L’s existence occurred after the announcement of The Starting Line’s hiatus in 2008.

“Whether or not it’s comparatively successful, it’s still so satisfying to do,” Vasoli said. “No matter the success that comes out of it.”

In 2008 the band released its first album, “Initial.” The eight song album was the first taste of Person L’s more experimental sound. Songs like “Storms” and “Wooden Soldiers” displayed the drastic change in sound Person L was from Vasoli’s previous projects. After touring on “Initial” with big name acts like Anthony Green, Good Old War and Motion City Soundtrack, Person L took the beginning of 2009 to record its second album, “The Positives.”

“I wanted it to have a real live sound,” Vasoli said. “Roomy and nothing too processed.”

The album was produced by Copeland front man Aaron Marsh. The album was a mixture of ’60s influenced jams that blended with the contemporary sounds of Vasoli’s voice. “The Positives” solidified Person L’s status as more than just a side project, but rather a project with its own identity and sound.

“We listen to a lot of ’60s rock and roll,” Vasoli said when asked his influences for the album. “We’re huge Beatle fans, we love the Kinks and we also like a lot of soul like James Brown and Curtis Mayfield and Sam Cooke.”

As part of the band’s first major tour after the release of its second album, Person L was invited to support Copeland’s last tour along with other supporting acts I Can Make a Mess Like Nobody’s Business and Deas Vail. Taking to the stage, Vasoli and his band mates, Charles Schneider on bass, Nate Vaeth on piano, Ryan Zimmaro on drums and Brian Medlin also on drums, Person L brought a rock sound to the lineup that gave the show some well needed diversity.

“We’ve been touring together so much,” Vasoli said. “Everybody’s personalities have come through a lot more now. We’re way more of band, we write our songs together.”

When Person L first release its first album, “Initial,” the band heavily focused on the concept of having no label, a route many bands are taking in the current scene of music.

With the release of its second album Person L teamed up with the label Academy Fight Song to release not only the CD, but also the vinyl record pressing of the album.

“We wanted to do the vinyl things and we didn’t have the money for it,” Vasoli said.

Vasoli explained that with the first Person L album he earned a great deal of knowledge behind the business side of music, but had a great deal of relief when Academy Fight Song stepped in to distribute the second album.

“I would probably do another release with them again because it such a satisfying partnership,” Vasoli said. With the recent critical success of Person L’s second album and the band’s increasing popularity, Vasoli seems determined to focus on the music that he loves doing.

When asked whether or not he would go back to his previous project, The Starting Line, he responded, “It is fun to do that stuff, but I’m not in a place right now where I’m super ready to do it. I do occasionally have an idea that fits in the starting line stuff and I know those guys are down to do it. It will happen eventually.”

Although pop-punk enthusiasts might be disappointed to hear where Kenny’s focus is in music, it is satisfying to hear about Vasoli’s progression with Person L. It is the perfect place for someone of his talent to grow.

“I love what I do, I love playing music with these gentlemen and I really appreciate, whole heartedly to anyone who listens to us,” Vasoli said.