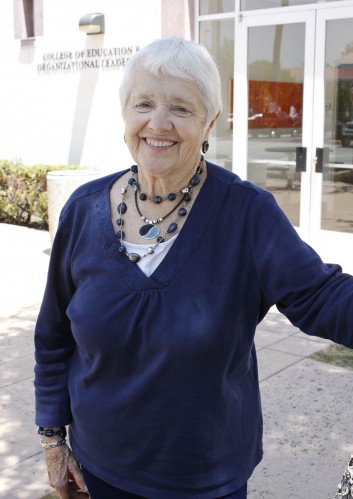 One of Peggy Redman’s greatest passions has been to prepare teachers to work with children in today’s world. Redman is an alumna of the University of La Verne, joined the staff in 1983 and served as director of alumni while earning her doctorate in education, which she completed in 1992. She then served as director of education and professor of education until 2009. She now holds the LaFetra Endowed Chair for Excellence in Teaching and Service. / photo by Rafael Anguiano

As professor of education and director of teacher education at the University of La Verne, Peggy Redman has devoted most of her professional life to educating the next generation of teachers in America.

In a sit-down interview she discussed why she went into education, why she disapproves of Arizona’s latest bill and her life as a newly wed.

Tell me about your academic history?

I’ve always loved school. And I’ve always taken a lot of pride in my ability to do well in school. In high school I was typically college-prep, because most of us who were, were going in that direction. I graduated fourth in my class out of 450 students (from Pomona High School), and then I came to La Verne. I was accepted at Stanford, but my parents had been students at La Verne in the late ‘20s and early ‘30s, and I always wanted to come here.

I’ve tried to look at this whole concept of grades, and the importance of it. I grew up in a family of educators, my parents never said to me “we’re going to pay you $5 for an A,” or something like that, it was just an expectation, if you could do it, you could do it. I think that’s always been my belief, it has to be intrinsic and we each have a different need for that kind of thing. So I just liked school. And I loved to read and all the things that go along with it.

When you were in college, where did you see yourself in 10 years?

When I was an undergrad, that’s a really good question, I had always planned to be a teacher, so I think I did see myself teaching. I was a math minor, so I saw myself teaching history and math, those were the two subjects that I loved. In fact, my first teaching experience was in a middle school teaching both of those subjects. I think I may have seen myself somewhere along the line as an administrator. But the piece you need to remember, when I graduated in 1960, women were expected to have families and raise children, so that was always part of the equation as well.

Except that I always had this desire because I had served in a lot of leadership capacities throughout school, that I really wanted to do something in the professional world that was significant.

What words of advice or encouragement do you have for the graduating class of 2010?

I would say that you need to be proud of finishing a degree. There are so many people who start a degree, and for some reason or another, are not able to complete it. It’s just something to be very proud of. Also, I’ve always believed commencement is important but it’s important because it’s the next step in your life.

Whether you decide to go onto more school, or whether you want to go into a profession, any one of those ways is going to be better served because of the fact that you completed this degree.

What is your take on the new Arizona policy that prohibits certain classes that teach about the history of certain ethnic groups?

I totally disagree with that. In fact, I was listening to NPR this morning and I’m thinking, it’s such a step backwards.

I’m a history major. So I have great respect for the founding persons and founding fathers of our country. But I think for many years, when I look at early textbooks, groups were minimized that had a significant part in the development of our country. And to say that you should not allow any kind of study that deals with anything besides European, white western perspective is just ludicrous.

What do you think about a three year grad plan in the UC system?

I’m OK with that. I think a three year plan means you are completely dedicating all your summers and you’re taking very heavy loads.

I would see it for not every student. If a student wants to come to college or a university and have an active student life, like serve in the Campus Times, or play sports, then it would be very difficult to finish in three years.

But we have so many returning students that are really focused on trying to complete their degrees, that I think it’s an option for them. I don’t think it should ever be the only way people do it, but I think as an option (it would be) fine.

So it shouldn’t be solely for the purpose of saving money?

I guess you would save some money with it, but you would have to go into summer so probably you are not going to save as much money. You are going to save time. I’ve had many students come in to teaching at age 45, or 50, 55 and they are ready to move forward, where it’s very different if you are 22, like I was when I finished.

Is there anyone or anything you hold most responsible for the financial crisis affecting the Cal States?

It’s a real travesty right now that there is not enough money for all students that are eligible to attend.
Placing blame is tough because I think it is much wider than being able to say that one person or one group of people are in charge.

It seems to almost be endemic of the national economic crisis. Sometimes I say in California we are ahead of the game. We are ahead of the game in the good stuff and sometimes in the bad stuff as well. I think it’s really hard. It’s also hard on professors because many of them have had to take furlough days and what not, the same as the students have had to do. I don’t know what the solution is, except to get more money in the system. The public schools are facing the same dilemma.

With freshman enrollment up for the 2010-2011 academic year, what do you hope to see happen with ULV next year?

I think it is exciting because it means that you are bringing many more perspectives and different students.

It will be a stretch because we have to be sure that we can adequately have classrooms and services and enough classes available for students. But I think I see it as a positive thing because I think it is going to bring a new energy to the institution, because we are sort of based on what we do in our undergraduate population. I work mostly with graduate students, but all the budgeting goes around the numbers of undergrads. It could be a very good year for La Verne.

Has this ever happened in previous years?

Not as big a growth as this. I think it’s related to that other question, the Cal States and people on wait lists. I do know that in our teachers ed program we have the same thing. We have people coming here because they couldn’t get into Cal Poly or somewhere else.

This leads me to the “Teaching Capitol of California” billboards we see on the freeways. Do you like how the University has been marketing itself?

You know I’ve had very interesting discussions with faculty on this because some faculty hate it. They’ve been actually quite positive for our students because we’ve had education classes up there (Bakersfield) for the last 25 or 30 years and they see it as sort of a fair representation.

I do understand that for some programs the (billboards) may appear cheap, but it seems like everybody’s doing it. What happened was, when ours came down in Bakersfield, Point Loma’s went up. When ours came down in Southern California, Azusa Pacific’s went up. I don’t know. It doesn’t get to me as much as it does some faculty. Some are really bothered, I do know.

What do you consider one of your biggest accomplishments in your career?

I think the thing I am most proud of is that I have been able to work with people who are going into the education field and are going to become teachers, because if you think of it in a metaphorical way, that each teacher affects a certain number of students, kind of like a stone that ripples, then if I am affecting future teachers and they are in turn affecting their students, then I feel like there is a lot of influence. I felt somewhat the same way when I was working in the public schools. When you are in an elementary classroom with kids for a whole year, you really have a connection. And I get people coming back sometimes years later with positive feelings.

When you were an undergrad student, what was your toughest challenge?

I was in ASB, if that’s what we called it then. I didn’t play sports because in my era there weren’t opportunities for women. I would say time management was probably the most difficult. It was important for me to do well in my classes but I was very social too.

What is your favorite thing about ULV?

The people. I have been a student here, my children have been students here, and I have a grandchild that is here now. One of the things that have been enduring is that when you come to La Verne, you get a sense that your faculty care about you and the people with whom you come in contact want you to be successful.

I think that is the thing I appreciate the most about La Verne. It is a place that takes people where they are and it helps them become the best they can be. I think that is a pretty amazing thing.

And I will say this, I have taught a lot at the off campus sites and I think there is the same feeling there too. A little different clientele because it’s more of a returning student kind of thing, but they still have that sense of wanting to be good. I think faculty, staff and administration has the best interest of the students at heart.

What do you like to do when you are not working?

I am a huge reader. I also like to knit. I have seven grandkids so I like going to little league games and all that kind of stuff. After being single for 22 years, I just remarried two years ago to a guy I had known. I reunited with him at our 50th high school reunion. We are just having more fun, it has been great. We like to hike and camp and do those sorts of things.

If there is one thing about ULV that you could change, what would it be?

You know what it would be? I would love to win the lottery and give millions of dollars. And just let them have a chance to develop all the great things that we have.

We have so much power in this institution and in the people. If we just had the resources to develop those, I think that would be great. I would make sure they had enough funding to do all the programs that we know are going to benefit students.