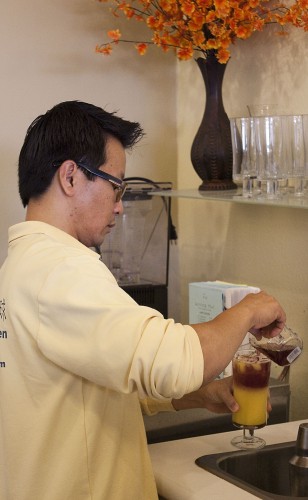 Neil Ta mixes the “Orange Joy,” a combination of cranberry and orange juices, at the family-run vegan/vegetarian restaurant, Loving Hut. Ta says that Loving Hut tries to cater to the tastes of vegans and non-vegans, offering items such as the vegan burrito. / photo by Jakeh Landrum

I love meat, so going to the vegan restaurant Loving Hut in Upland was a departure. Knowing that there would be no lean and savory chicken or mouth-watering beef I questioned if I would leave Loving Hut satisfied. I actually did not leave satisfied. I left utterly delighted.

For those who do not know the distinction, vegans are stricter than average vegetarians in that they eat no animal products whatsoever.

The restaurant sits beside a Fresh and Easy on Foothill Boulevard, just west of San Antonio Avenue.

The dining area is small yet inviting, the chairs and tables are lined up against the walls and guests grab their own menus and seat themselves.

The restaurant was originally called Veggie Era until November when the owners changed the name to Loving Hut and made strictly vegan.

The franchise has about 100 stores worldwide from France, to Hong Kong as well as Germany and several in Southern California including Alhambra, Fresno, Orange and San Diego.

“The reason the family opened the restaurant was to introduce the plant diet to people,” said Neil Ta, manager of Upland’s Loving Hut.

Loving Hut is the only vegan restaurant in Upland.

The Loving Hut menu is a diverse combination of Asian and American fare including wantons, soups, curry and pasta.

The first thing I noticed about the menu was that no item exceeded $11, dispelling the notion about organic and vegan food being expensive.

The most expensive item on the menu was the Rock and Roll, a beef and broccoli-like meal consisting of texturized vegetable protein broccoli, tomatos and corn.

The menu displayed pictures and a brief description of every item. On the menu there were several eco-friendly statistics regarding going green, and adopting a vegan diet: if one person were to go vegan for one year it would reduce 3,267 pounds of carbon dioxide emissions and save 24 chickens, the menu said.

The most difficult part about eating at Loving Hut was choosing what to eat since many of the choices looked appetizing. Luckily I narrowed it down to the Loving Burger and the Loving Fried Rice.

The Loving Burger consisted of a veggie patty, onion, tomato, mustard and egg-free mayonnaise (“vegenaise”) all on a homemade wheat bun. My choice was the Loving Fried Rice that consisted of vegetables and protein chunks.

The rice arrived on the table in the form of a tall tower of fried delight. The rice tasted better than other fried rice I had eaten in the past and the protein chunks were a great substitute for chicken. There was not one time during my meal that I missed chicken.

Though my meal was great, I was a bit disappointed that my stomach lacked the room to enjoy one of Loving Hut’s many desserts.

The restaurant staff at Loving Hut are very welcoming.

“I would recommend people to be vegan one day a week for the sake of the environment,” Ta said.

Loving Hut is an ideal restaurant for people who are vegan, vegetarian or interested in a healthy alternative.

“It has a friendly environment, it was affordable and the menu had a lot of variety. The restaurant has extremely good service, compared to most vegan restaurants,” Ngoc Bui, junior behavioral science major, said.

Michael Phillips can be reached at michael.phillips2@laverne.edu.