By Justin Davis-Battle, Scott Mirimanian on November 12, 2010 in Basketball, Sports 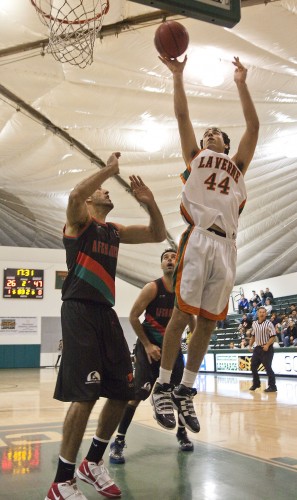 Junior center Alex Wolpe puts up two points against Afghanistan’s National Team during Monday’s preseason game. La Verne would go on to cut a 24 point deficit down to eight in a valiant second half effort in the game which they lost 80-72. / photo by Scott Mirimanian

A slow start led to an exhibition loss for the men’s basketball team as the fell to the Afghanistan National Team, 80-72.

The Leopards struggled early and found themselves down 21-7 half way through the first half. Many of their problems came from good defense from the ANT and poor shooting. The Leopards ended the first half down 44-20 and shooting only 17.5 percent from the field, compared to ANT, which shot 55.6 percent.

“They came out really sloppy and didn’t look ready to play,” junior Travy’on Samuel said. “They looked like a completely different team in the second half. If they played like that the whole game they would have won.”

Coming out of the locker room the Leopards seemed to have made some halftime changes starting the half with an 8-3 run and getting the crowd back into the game. The game also became a lot more physical with many cheap shots thrown and missed calls from the referees.

Although the Leopards stepped up their level of play during the second half, the ANT was able to go on a 13-4 run and push their lead up to 24 and keep it for the remainder of the game.

An additional push by La Verne would make things very exciting in later stages of the game. Down 74-54 with 4:55 to play, the Leopards went on a 15-1 run capped off with a jumper from Jonathan Bastos to pull within six making the score 75-69 with 1:53 left in the half.

“We played more as a team and executed our sets better,” freshman forward Jack Mayer said. “We started to play harder and picked up the effort on the defensive side of the ball.”

Unfortunately, the ANT proved to be too much for the Leopards as they were able to escape with an 80-72 victory. Guard Safi Mojaddidi had a game high 26 points for ANT while Alli Noorzad had 14 and Nafi Mashriqi piled up 13 points and seven rebounds.

“We need to work on our defense. If we had played better in the first half we would have won by 20 points,” freshman forward Brandon Baker said.

The Leopards bench came up big as they were able to score 29 points and triggered the comeback that almost won them the game.

Guard John Leggett had a team high 12 points. Tyler Hoyt was able to come off the bench and add 11 points and teammates Jonathan Bastos and Alex Wolpe were able to put up ten points each.

This year’s squad has plenty of new faces with the addition of nine freshmen who help to improve last year’s record and make a playoff push. The Leopards finish 5-9 in SCIAC play and 9-16 overall. This strong mix of younger players along with some upperclassmen seems to be the perfect fit for this year. Only time will tell how they come together and play.

La Verne will begin its regular season Tuesday when the team travels to Orange to face Chapman at 7 p.m.