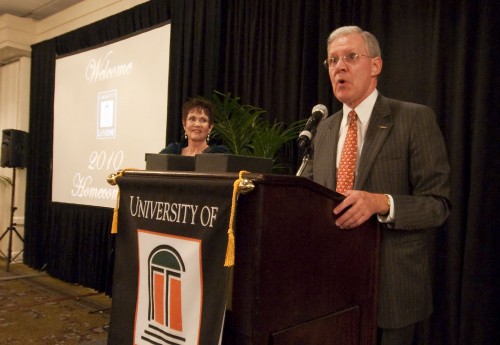 President Stephen Morgan and his wife Ann Morgan are honored as recipients of the Alumni of the Year award Friday at the Sheraton Suites Fairplex during the Homecoming Alumni Dinner. / photo by Christopher Guzman

Stephen and Ann Morgan were honored as Alumni of the Year at the Sheraton Fairplex Hotel last Friday.

The gathering consisted of faculty, staff, alumni and their families as they enjoyed dinner and a ceremony honoring the president and his wife.

“They are the spirit of who we are and when I sing the Alma Mater I think of them,” Barbara Poling, the associate dean of the college of education said.

A short video was played to honor the Morgans’ involvement on the campus and highlight their accomplishments as alumni of the University of La Verne.

The video, titled “Leos for Life,” had short anecdotes from other faculty and staff who knew the Morgans before President Morgan’s inauguration in 1985. It showed the level of involvement of both Steve and Ann Morgan through their years as students and as alumni.

“Every day that you look at La Verne you can see the work that they have put into the campus,” Steven Solana, junior biology major said.

Representatives from University Advancement had asked communications department faculty to work on the video that wove together old and new images from throughout Morgan’s presidency.

“It was really interesting,” Mike Laponis, professor of communications, said. “I’ve been here for his entire presidency and it was fun going back and digging up the various clips and pictures.”

Following the video, the Morgans were awarded two crystal books inscribed with their name and graduating year.

Both Stephen and Ann Morgan gave a speech thanking everyone for their support and passion at ULV.

President Morgan thanked individuals and staff as he accepted his award. He had both groups and individuals stand in recognition for the work they had put into making ULV what it is today.

“The faculty are the strength, and what a difference they make,” Morgan said. “You are the ones that really build up the University of La Verne.”

Ann Morgan thanked her family for their patience and support through all of the involvement their family had during President Morgan’s 25 years at the University.

Both of the Morgans have had an enormous impact on the campus.

While President Morgan has been the longest serving president for ULV, Ann has gotten involved with the beautification of the campus and has reached out to the students throughout her involvement.

On top of her involvement, Ann has also gone on to receive two bachelor’s degrees and one master’s degree through the University and opened up her own private practice in counseling.

Through it all the Morgans have stood by one another as they have watched the University grow like another member in their family.

“This is a great honor to be selected. It’s obvious that I love La Verne and its people and to receive this honor is touching to me,” President Morgan said. “I never thought I would be a recipient, I appreciate the opportunity to stand on this side of the microphone.”

As both recipients left the podium they were met with a standing ovation by the over 200 guests attending the ceremony.

“It’s overwhelming and such an honor,” Ann Morgan said. “The whole experience at La Verne has been a unique and uplifting experience.”

As the Morgan era at La Verne comes to and end, the receiving of this award has given them both the proper send-off.