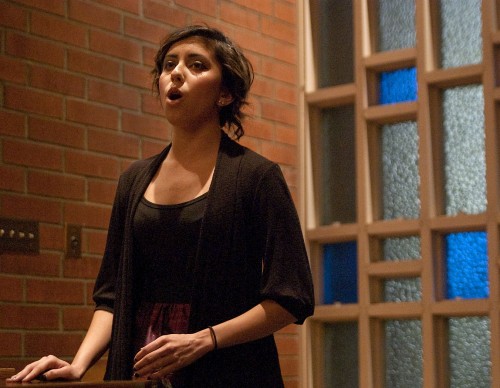 Maggie Moreno joined fellow students of adjunct professors Carol Stephenson and Moh-Wei Chen-Hribar for a student recital Nov. 18 in the University Chapel. Chen-Hribar accompanied the students on piano as they performed pieces they learned in one-on-one sessions with the professors. / photo by Christopher Guzman

The small University Chapel was filled with the sound of piano keys and the voices of students as they sang solos for an audience of about 20 people last month.

Audience members remained silent and watched as the performers set aside their nerves and filled the chapel with melodies that captivated the listeners.

Most of the performers are in their first semester of classes in the music department.

However, the performance seemed professional, and the students had the talent and stage presence of performers who have been at ULV for years.

One highlight of the performance was Nicee Gonzalez performing “Pie Jesu,” a piece often featured in the Requiem Mass.

Her performance was memorable and sounded very mature.

“They all looked great; they all took it seriously. They all performed the best they’ve ever done,” adjunct music professor Carol Stephenson said.

Stephenson explained that each student must take six hours of vocal training each semester to prepare for the performance and learn different vocal techniques.

All of the singers who performed on Nov. 18 were accompanied on the piano by adjunct music professor Moh-Wei Chen-Hribar.

The piano complimented the voices of the singers and added a sweet melody to accompany the students’ vocal performances.

“My main goal is to enhance the student and let them shine, and of course to bring out the composer’s intentions,” Chen-Hribar said.

Chen-Hribar also brought four students from her class to perform piano for the recital.

Although some students showed a small amount of nervousness, they managed to pull off the performance gracefully.

Freshman Megan Uriarte stood in front of the audience with a confident demeanor.

“I prepared for it by rehearsing all week. I practiced until I could do it three times perfect,” Uriarte said.

Although there were some minor slips in lyrics throughout the performance, the music was entertaining and the audience did not seem distracted by the mess-ups.

It was also distracting and rude when groups of people came into the chapel in the middle of Maggie Moreno’s performance of “Love Has Eyes” by Henry Bishop.

For those interested in seeing fellow students perform, the next student recital will be held Thursday at 4:30 p.m. at the University Chapel.

Marilyn Mejia can be reached at marilyn.mejia@laverne.edu.