By Allison Lavelle, Amanda Nieto on February 11, 2011 in News 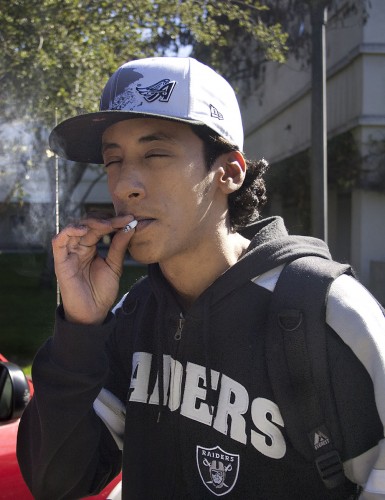 Sophomore Abdul Dolaimi takes a smoking break between classes in parking lot C. The 22 year-old uses this time to relax and socialize with his friends. Students are now limited to smoking in designated areas of the parking lots. / photo by Allison Lavelle

The new smoking policy, which took effect Jan. 1 and banishes smokers to parking lots and a few designated smoking areas, is getting mixed reviews from students and staff, who also note that its enforcement so far has been spotty.

Oct. 15 brought the approval of the new smoking policy for the university. The policy states that smoking is only allowed in parking lots and public sidewalks adjacent to parking lots.

Its goal is to reduce the amount of secondhand smoke that nonsmokers are exposed to.

“(The policy) is bothersome,” Ariana Harris, freshman theater arts major, said. “It takes up time that I don’t have.”

Harris is not the only one who finds the new policy a hassle. Stephanie Aguilar, sophomore theater arts major, shares in the frustration.

“I don’t understand the point,” Aguilar said. “They made this rule with no explanation. I showed up to class one day and there was a new smoking policy.”

Cynthia Denne, director of Student Health Services, said that the policy is a responsible action that will help diminish secondhand smoke on campus, and contribute to a healthier environment.

Other local universities have similar policies, such as UCLA whose policy went into effect September 2009.

Smoking is allowed in parking lots and in designated outdoor eating areas.

The goal to protect non-smokers from secondhand smoke has become a larger priority in recent years.

Around 250 toxic chemicals, including more than 50 known to cause cancer, are left in the air for nonsmokers to inhale.

Smokers are not the only ones left frustrated with the smoking policy.

Sophia Oropeza, freshman business administration major, said she has seen no change and no consequences.

“I see a couple of people smoking around campus and I’m thinking, did you not get the email—I did,” Oropeza said.

Sue Henry, director of Human Resources, said that there are no defined consequences for smoking in non-designated areas.

Aguilar not much has changed since the policy went into effect. The only difference is now there is a rule out there, she said.

“I don’t think it is being enforced enough,” said Rebecca Kennedy, freshman psychology major. “I think there should be a larger consequence for smoking outside parking lots.”

For those looking to quit smoking, there are programs to help.

The Student Health Center and Counseling and Psycho­logical Services are just a few organizations to help those in need of assistance.

Two recent sessions were held on campus by Kaiser and Anthem Blue Cross for those wanting to quit.

If students show an interest in these programs more can be made available, Henry said.