By Allison Lavelle, Branden del Rio on April 8, 2011 in News 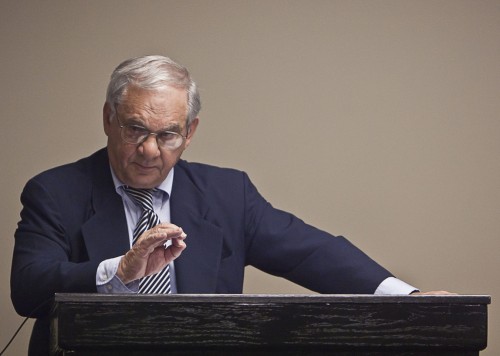 Professor Charles Doskow from the University of La Verne College of Law spoke in the President’s Dining Room on Monday. In his lecture, “Defending Ourselves Against Terrorism: Targeted Killing by Drones,” he described the advantages and disadvantages of using remote controlled, unmanned machines to target terrorists abroad. Doskow served as the dean of the College of Law from 1980 to 1985, and has been a faculty member since 1979. He currently teaches constitutional and administrative law, among others. / photo by Allison Lavelle

Charles Doskow, professor of law, discussed the legality of using drones to hunt terrorists in his lecture “Defending Ourselves Against Terrorism: Targeted Killing by Drones.”

The lecture took place Monday in the President’s Dining Room in front of an audience of about 20.

“If we can capture (the terrorists) then we should capture them,” Doskow said.

But if they cannot be easily captured Doskow felt that drones should be used to eliminate terrorists.

“I don’t see any ethical issues with that,” Doskow said.

The drones in question are weapons that are controlled by military personnel from remote locations.

Collectively they are known as unmanned aerial vehicles and include types such as the MQ-1 and RQ-1 Predators and the MQ-9 Reaper.

Doskow cited several laws and charters which he said allow the United States to use these drones against enemies.

He said that the United Nations charter allowed a country to defend itself in article 51 in addition to the Authorization for Use of Military Force.

Koh said that terrorists are “fair game” and that drones were just like any other weapon, just more advanced.

Koh also said that a state engaged in self-defense owes its enemies no due process and that the practice of using drones was not assassination.

The legality of drones should only be questioned in Pakistan, Yemen and Somalia where the United States is not currently at war defending itself.

The only other reason the legality should be questioned is because it is unknown who is behind the operation. According to the various charters and laws, only military personnel can give the word to kill the terrorists.

However, it is the CIA, which is made up of nonmilitary personnel, that gives the orders to kill the combatants.

The audience asked what qualifies one as a combatant.

“If they are terrorists, then they are combatants,” Doskow said. “Public opinion doesn’t seem to have a problem with it.”

“The only problem we have with wars is when Americans are killed,” Doskow said. “With drones Americans will not be.”

After his lecture Doskow allowed for questions.

“How do non-Christian nations feel about these laws?” Jonathan Reed, interim dean of arts and sciences asked.

“I don’t think of it as a moral or ethical issue. I think it’s a defense issue,” Doskow said in response.

Bill Cook, professor of English, said that many nations view the U.S. as a terrorist nation.

Cook asked that if the case of defending a nation were the only grounds for the use of drones, would it not be easy for other nations to attack us?

“Why wouldn’t they determine that this is under international law, too?” Cook asked.

He also asked if we would be able to use drones against Muammar Qaddafi’s forces in Libya since we are not at war.

It seemed as though many of the faculty members viewed the use of drones as an ethical issue rather than a legal and defense issue as Doskow did.