By Alexandria Orozco, Candice Salazar on April 29, 2011 in LV Life 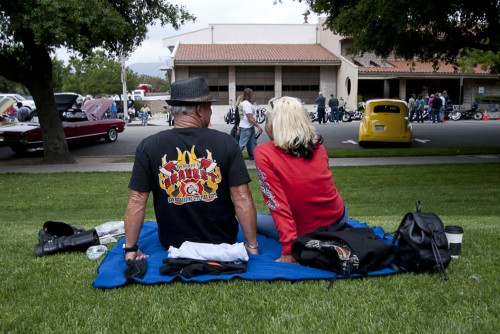 Garey and Maryanne Hummel kick off their boots and relax during the Cool Cruise Car Show in old town La Verne on Saturday. The Hummels, who have been married and riding for more than 30 years, own a motorcycle and have participated in many car shows. / photo by Candice Salazar

Downtown La Verne is generally a quiet place for a weekend stroll.

But this was not the case Saturday afternoon, when hundreds of colorful vintage cars, motorcycles, hot rods and trucks filled the streets and took visitors to a completely different time period.

“This is unbelievable, it is crazy how many different cars are here and the way they all wind around town,” Santa Clarita resident Chris Summerell said.

People of all ages were drawn to the event to look at all the beautiful cars as they chatted with fellow classic automobile lovers.

“Just being here so far I have seen about two or three hundred cars that I really like,” Summerell said as he stood next to his own classic vehicle, a yellow 1962 Corvette he converted into a street rod.

Many of the car owners present felt their car expressed other passions or hobbies and was far more than just a form of transportation to get from one point to another.

At first glance, the 1970 Volkswagen Beetle belonging to Craig Gibbs might make one think they had just seen one of America’s most beloved car characters, Herbie, due to its similar color scheme.

Gibbs, an Orange County resident, came to the show with his wife in hopes of helping people to better understand his car and its many uses.

“We do all kinds of things with this car, Gibbs said. “It is used for off-roading, daily transportation and drag racing.”

One vehicle that grasped the attention of both children and adults alike was a 2005 Chrysler PT Cruiser that was decked out with items from the famous superhero, Spiderman.

This royal blue car was filled with Spiderman trinkets, action figures and even had a television in the trunk that was playing episodes of the “Spiderman” cartoon series during the car show.

Another superhero-related car sat right in the center of Third Street and D Street and was nearly an exact replica of the Batmobile.

The “Batman” theme song could be heard from a block away and many people stopped to take pictures with the popular car.

ULV students getting out of class were also drawn in to the classic cars and fun music.

“I just got out of class and was on my way to the Campus Center when the Thun­derbird and Bel Air caught my eye so I stopped by to take a look,” graduate student Aileen Osborne said.

The event was not just limited to looking at cars.

The area was filled with the sweet and salty aroma of fresh kettle corn being popped and the barbecue foods from Jake’s Roadhouse, which also provides the foods for downtown La Verne’s Farmers Markets on Thursday evenings.

Members of the So-Cal Tribe Car Club stopped by to enjoy the festivities and promote their new club.

“We are a bunch of guys who got together because of our love for American classic cars and who have strong family values,” club member and founder Ron Medina said.

Family was something important to the event and many parents and grandparents who came brought their children and grandchildren along.

This included Fred Morales of La Puente who came with his young granddaughter to showcase his restored 1933 Plymouth Sedan.

“My favorite part about my car is driving it,” Morales said. “Having an old car, it doesn’t matter what color you are. Everyone is nice to you.”

Alexandria Orozco can be reached at alexandria.orozco@laverne.edu. 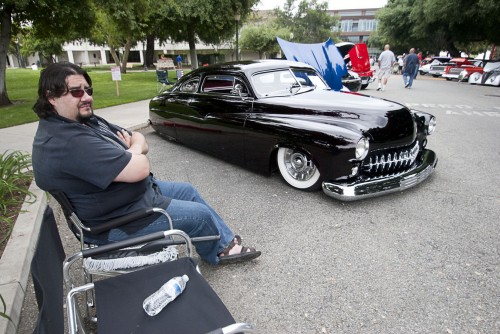 Austin Fuentes and his grandfather restored this 1950 Mercury Monterey L lowrider over a period of three years. Fuentes brought his Mercury to the Cool Cruise Car Show on Saturday in downtown La Verne. The judging panel offered awards for the best vehicles, a rockabilly band performed and vendors were set up to selling car-related items and food. / photo by Candice Salazar